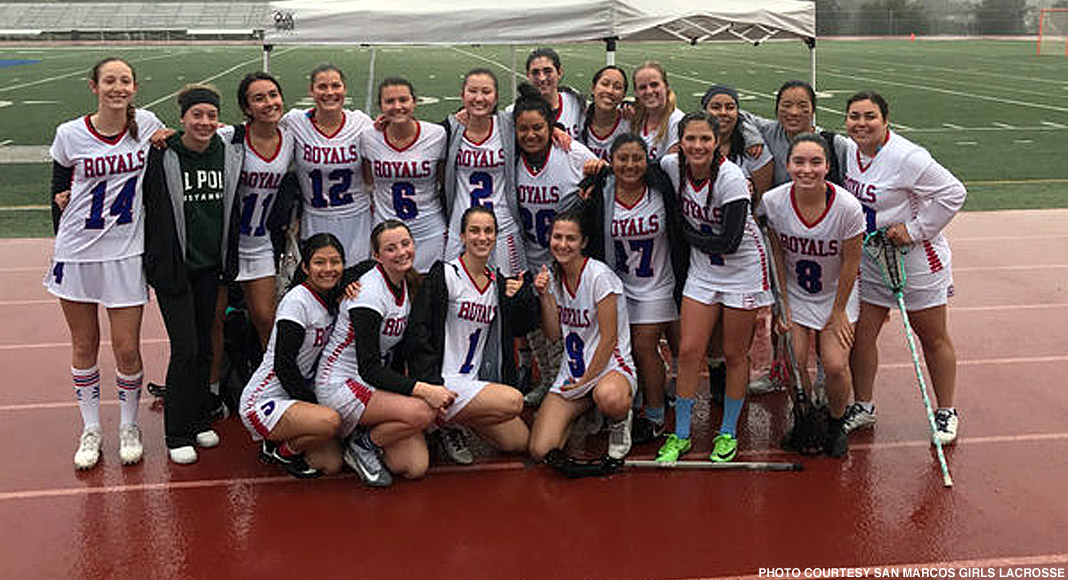 The San Marcos girls lacrosse team opened the season at home in the rain but were not slowed by the precipitation in a 16-3 win over visiting Louisville of Woodland Hills.

San Marcos took a 7-0 lead in the first 7:28 of play before Louisville notched its first goal 7:57 into the contest to make it 7-1. By the time Louisville scored its second goal, San Marcos had boosted its total to 10 goals.

The Royals led 13-3 at halftime, then shut out Louisville 3-0 in the second half, when San Marcos mostly just let the air out of the ball and had some players assuming different roles.

Ten different San Marcos players scored a goal or contributed an assist — nine of the 16 San Marcos goals were assisted — with Catherine McQueen leading the way as the quarterback of the offense. The senior, who converted from defender to attacker this season, had 2 goals and 3 assists. Two of her helpers went to senior midfielder Emma Beifuss, who scored a game-high six goals to lead the Royals. Midfielder Simone Stone had 3 goals and 1 assist but as importantly, the junior dominated the center draw, controlling the restarts for San Marcos.

Rock solid anchoring the defense was goalkeeper Adriana Espiritu Morales. The sophomore had six saves and only three goals allowed for 66 percent. Her clearing efficiency was one of the best in her young career. Her pinpoint passes started the San Marcos transition game time and time again. Starting defenders Sophia Alexander, Shaday De Leon, Yvonne Ibarra and Aubrey Sturgeon were in front of Espiritu Morales in that 7-0 start to the game and proved stifling early for Louisville.

“This is a great start for us and a nice confidence builder in our first game to just flat out be the better team,” first-year head coach Paul Ramsey said. “The effort and enthusiasm is right where we want it, and to get tough, defensive play along with saves and a balanced offense is really nice as we start to find ourselves and get to our potential.”

San Marcos improves to 1-0 and next plays at Valencia on Saturday. Louisville drops to 0-1 and faces Notre Dame of Sherman Oaks on March 7.