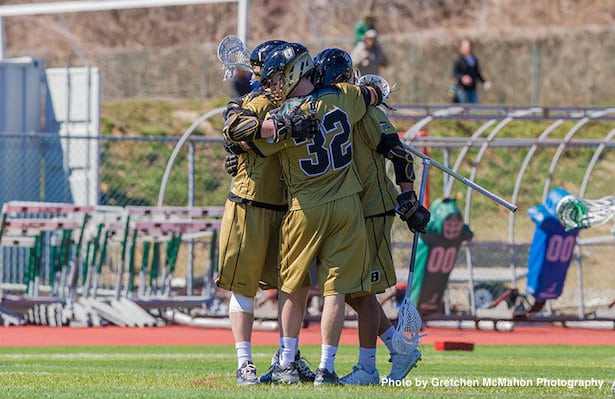 Three former San Diego high school players are expected to be key contributors for the Bryant University Bulldogs this season.   The four-time Northeast Conference Tournament Champions hope to return to the NCAA tournament for the fourth-straight year this spring with the help of former La Costa Canyon teammates Kyle Mummau and Cam Ziegler, and former Poway star Ryan Sharpe.

All NEC First Teamer Mummau will head up the close defense unit. Mummau will return as the Bulldogs’ top cover man re after missing the second half of the 2015 season due to injury.  Head Coach Mike Pressler say “Kyle is an incredible cover guy – one of the greatest I’ve coached at any level.

Sharpe is a returning starter who scored nine goals and six assists as a sophomore, picking up a hat trick against Hartford.

Ziegler is expected to start at after an impressive freshman campaign.  He posted an impressive rookie season, earning 16 starts on the top line en route to an NEC All-Rookie Team nomination. Tallying 15 goals and five assists a season ago, Ziegler will be expected to find even more success with a year under his belt. Ziegler will be joined at midfield by fellow returning starter Collins Gantz and Tom Kennedy.   “The things that come to mind when you think of Collins, Ryan and Tom are their speed and how gifted they are with both hands,” said Pressler.

“In my 10 years at Bryant, this is our best and most complete attack group,” said Pressler. “All three were starters a year ago, and this is a big, athletic, physical unit. All three are completely different players who complement each other extremely well. Offensively, the Bulldogs will go how Shane, Tucker and Cam go.”