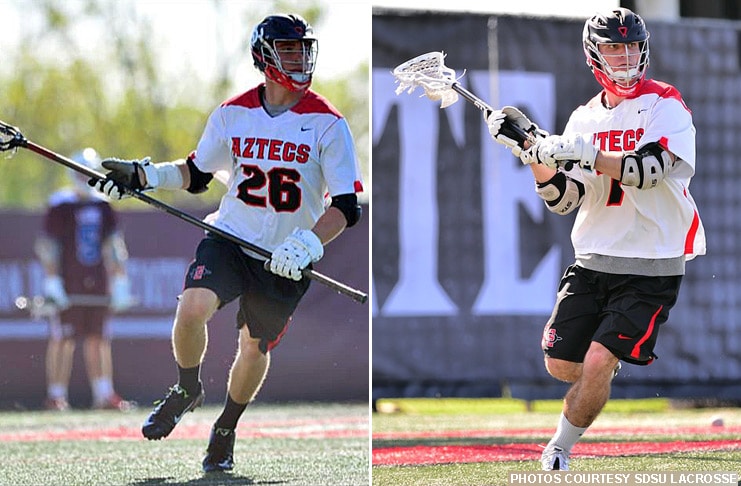 The San Diego State Aztecs announced this week the unanimous selection of Kevin Leis (right) and Adam Gargus (left) as co-captains for the 2017 season. Both athletes are tremendous leaders on and off the field, head coach Jesse Foss said in a release, and the team will lean on their experience to guide them through a tough regular-season schedule.

Leis, a junior attackman from Sacramento, is a three-year starter and returns as one of the team’s leading scorers. He put up 38 points (26 goals, 12 assists) in 2016 after an outstanding freshman campaign in which he put up 36 points (26 goals, 10 assists). A product of Bella Vista High School, Leis was a four-year varsity starter and was named first-team all-league his junior and senior seasons. Leis will once again be counted on to be one of the team’s leaders on offense.

Gargus, a senior defenseman from Bainbridge Island, Washington, is a four-year starter for San Diego State and one of the team’s leaders in ground balls. He has been credited with 154 ground balls in his three seasons. Gargus was selected to the SLC All-Freshman team in 2014. At Bainbridge Island High School, Gargus was a key contributor on one of the top programs in Washington. Gargus will look to lead a strong defensive unit this spring.

The Aztecs begin their 14-game schedule on the road against Claremont College on Saturday, Feb. 4.