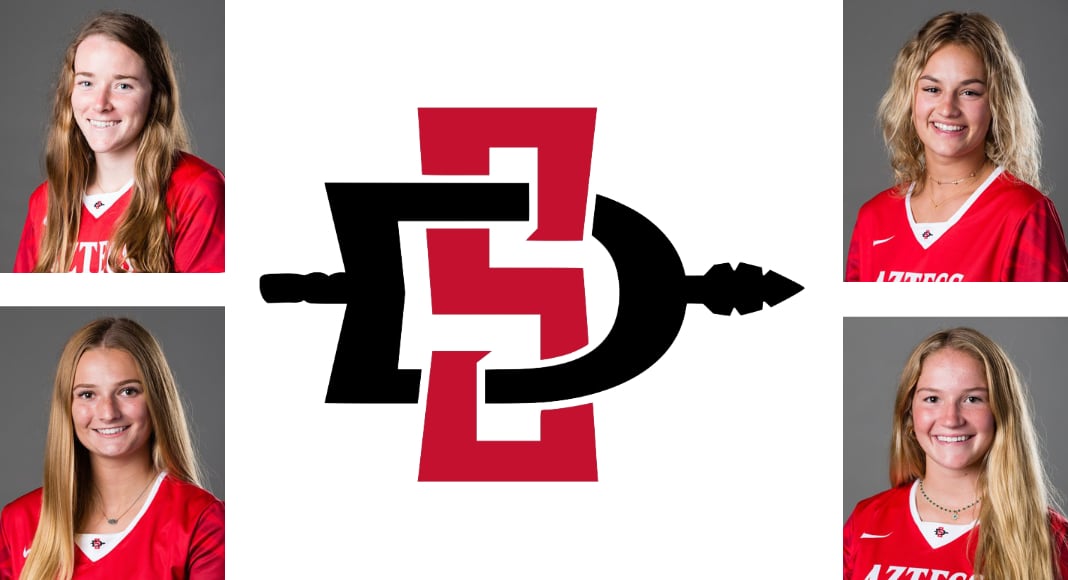 “We have been so excited for this class to get to campus, and now that they are here, we are even more delighted,” Aztec head coach Kylee White told GoAztecs.com. “This group has challenged our returning players from the first day they all stepped on Aztec Lacrosse Field. They are fearless, coachable and they are ready to compete. I am extremely thrilled with their growth this fall and can’t wait for spring.”

The Aztecs stayed close to home with this recruiting class.  Nine of the 10 new freshmen hail from the west coast.  In addition to the four from OC, the Aztecs added two players from San Diego, two from the Bay area, one from Washington, and one from Ohio.   The 2018-19 Aztecs carry 18 Californians on the roster, compared to 13 last season and 9 five years ago.

Below is an in-depth look at the Aztecs’ freshman class:

#29 Erin Cady
Danville, Calif./California HS
Position: Defender
Played her senior season at California High School in San Ramon, Calif., where she helped the Grizzlies to the East Bay Athletic League co-championship as a senior … Won three varsity letters at San Ramon Valley High in Danville, Calif., where she merited first-team all-conference distinction as a defender and second-team honors at the midfield position … Helped the Wolves to an EBAL co-championship as a freshman … Also earned three letters in cross country at San Ramon Valley and received Athlete of the Month recognition on two occasions … Excelled in the classroom as well, collecting four scholar-athlete awards apiece in lacrosse and cross country … Intended major is biology at SDSU.

#35 Sammie Cohen
Seattle Wash./Roosevelt HS
Position: Midfield
Earned four letters at Roosevelt High School in Seattle, Wash. … Capped her senior season by landing a spot on the US Lacrosse All-American team and received all-state recognition … Also garnered all-Metro League accolades on two occasions in 2017 and 2018 … Served as team captain during her junior and senior seasons as well … Was a member of a Roughrider squad that received the Washington State Team Sportsmanship Award and Academic Team Championship 2015 … Three-time participant for the Washington state team that competed in the US Lacrosse National Championships from 2014-16 … Received a selection to the 2017 World Games Youth Tournament in London, England … Also won letters in soccer and cross country as a prep … Honor roll student who was among the top 10 percent of all graduating seniors in the state of Washington … Her sister Emily is a junior on the Claremont-Mudd-Scripps lacrosse team … Undeclared major.

#46 Sam Horan
San Rafael, Calif./Marin Catholic HS
Position: Goalkeeper
Enjoyed a distinguished prep career at Marin Catholic High School in Kentfield, Calif., where she earned US Lacrosse All-American honors as senior … Garnered all-Marin County Athletic League accolades on three occasions, meriting first-team recognition during her sophomore and senior campaigns to go with second-team distinction as a junior … Also collected her team’s Most Valuable Player award in 2018 after recording 183 saves, a .588 save percentage and an 8.4 goals against average in 735 minutes, according to MaxPreps … Additionally played three years of girls varsity basketball as a prep … Was named MVP of her JV squad as a freshman … Two-time US Lacrosse Academic All-American … A National Honor Society and California Scholarship Federation member who landed on her school’s Dean’s List all four years … Recipient of Marin Catholic High’s Excellence in Student Leadership and Excellence in Athletics awards … Plans to major in biology/pre-med at SDSU.

#5 Caitlin Jones
Carlsbad, Calif./La Costa Canyon HS
Position: Midfield
Starred for local prep power La Costa Canyon High, where she helped the Mavericks to three appearances in the CIF San Diego Section Open Division finals (2015, 2016, 2018), winning a championship as a freshman … Twice garnered US Lacrosse All-American accolades to go with first-team all-CIF San Diego Section honors following her junior and senior campaigns … Served as a team captain during her senior season in which she totaled 76 goals, 102 draw controls and 112 ground balls, meriting first-team all-Avocado West League honors for the third year in a row to go with her second straight team Most Valuable Player award … Led the team in ground balls and draw controls as a sophomore and junior … One of two SDSU recruits to play for the South squad in the 2018 Adrenaline All-American Game, joining Cailin Young … Was also selected to the San Diego team that competed in the US Lacrosse National Championships in 2016 and 2017 and was a two-time participant for the Under Armour West Highlight Team … Received scholar-athlete distinction all four at La Costa Canyon High and was named to the San Diego Union-Tribune all-academic team in 2017 and 2018 … Undecided on a major at SDSU.

#37 Lauren Kilger
Irvine, Calif./Foothill HS
Position: Midfield
Earned four varsity letters at Foothill High School in Santa Ana, Calif. … Helped the Knights to four consecutive CIF playoff appearances, including a Southern Section championship as a freshman in 2015 … Finished with 82 goals, 49 ground balls and 25 draw controls during her prep career, according to MaxPreps … Served as team captain her senior season … Was twice selected to the Orange County team that competed in the US Lacrosse National Championships in 2016 and 2017 … Helped her squad capture the Iroquois Division title at the tournament in 2017 with a 4-0 record in pool play … Played club lacrosse for OC United and the West Coast Starz gold team … Also excelled in the classroom, landing a spot on Foothill High’s honor roll all four years to go with Century Conference scholar-athlete recognition in 2016-17 … Recipient of her school’s Ali Ricshe Scholarship award … Plans to major in criminal justice at SDSU.

#22 Courtney Robinson
Terrace Park, Ohio/Mariemont HS
Position: Midfield
Earned four varsity letters at Mariemont High School in Cincinnati, Ohio, where she led the Warriors to their first-ever girls lacrosse OHSAA Division II state championship as a senior … Broke the state title game record with six goals and eight points … Was named a US Lacrosse All-American and captured Cincinnati Enquirer Player of the Year honors in 2018 after totaling 93 goals, 43 assists and 119 draw controls that season … Holds the school record with 302 draw controls during her prep career … Twice served as team captain … Also won two letters running cross country for Mariemont High … An honor roll student who received scholar-athlete distinction as a senior … Two-time state qualifier for the Distributive Education Clubs of America (DECA) competition … Plans to major in journalism at SDSU with an emphasis in public relations.

#44 Taylor Stern
Orange County, Calif./Beckman HS
Position: Attack
Won four varsity letters at Beckman High School in Irvine, Calif. … Collected Most Valuable Player honors and first-team accolades from the Pacific Coast League after leading the Patriots to the conference championship and an appearance in the CIF Southern Section playoffs … Tallied 67 goals during her senior season, according to MaxPreps, landing a spot on the all-Orange County second team … Also topped her squad with 100 points (72g, 28 a) and 46 ground balls as a junior … Served as team captain for two years … Was selected to the Orange County squad that competed in the 2016 US Lacrosse National Championships … Also excelled in the classroom, meriting scholar-athlete recognition while landing a spot on her high school’s honor roll … Intended major is psychology at SDSU.

#18 Cailin Young
San Juan Capistrano Calif./St. Margaret’s Episcopal School
Position: Midfield
A heavily decorated player who starred at St. Margaret’s Episcopal School in San Juan Capistrano, Calif. … Twice earned All-America honors from US Lacrosse in 2017 and 2018 … Was named the US Lacrosse Orange County Player of the Year and the Orange County Register Lacrosse Athlete of the Year as a senior after totaling 64 goals, 113 draw controls and 43 ground balls, according to MaxLaxoc.com … Also garnered her second straight first-team all-county accolade that season after leading the Tartans to a school-record 18 victories, capped by the program’s first Orange County and CIF Southern Section championships since 2008 … Twice served as team captain … Collected her school’s John Balak Award, which recognizes selflessness, dedication and competitive spirit … Was one of two Aztec recruits to play for the South squad in the 2018 Adrenaline All-American Game, joining Caitlin Jones… Also won four letters in soccer as a prep … Was selected team captain as a senior, meriting first-team all-conference honors to go with second-team all-CIF distinction … Additionally excelled in the classroom, landing on her high school’s honor roll in all eight semesters … Her older sister Marissa played lacrosse at Lafayette College in Easton, Pa.