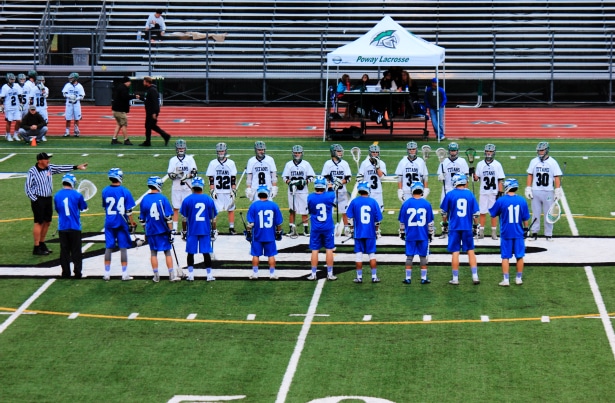 The San Diego boy’s lacrosse playoffs begin tomorrow, and for those of you who have not been following the San Diego lacrosse season very closely this year, the Open Division playoff seedings have more than a few surprises.  Pacific Ridge High School  sits at the top of the bracket with the No. 1 seed. Meanwhile traditional powers like Cathedral Catholic and Torrey Pines hold the No. 7 and No. 8 seeds, respectively.

This year in San Diego, the playoff scenario for the Open Division is going to be a little different than usual. While several of the the perennial superpowers of San Diego lacrosse remain in the playoff conversation for the umpteenth year in a row, there are some surprise appearances that are turning a lot of heads in the lacrosse community. Most notably, Pacific Ridge comes in as the top seeded team in the tournament, brushing teams such as Westview, Scripps Ranch and Rancho Bernardo aside on their way to the spot usually reserved for teams such as Torrey Pines and La Costa Canyon. Valley Center, another dark horse team, also made enough noise this year to earn the four-seed. Here, we preview the four quarterfinal games that will take place on Saturday, deciding who moves on to the county’s semifinal round.

This playoff pairing is one that is not easily recognized in the San Diego lacrosse community, as the small coastal school hosts Division I talent factory Torrey Pines in the early game on Saturday. Pacific Ridge fired on all cylinders all season to win an impressive 15 games out of 18 played. The Firebirds are battle-tested, having won a quadruple-overtime contest on the road against Westview, two regular season contests over seventh-seeded Santa Fe Christian and a win over fourth-seeded Valley Center this season.

Defeating Torrey Pines, however, is no small feat no matter their seed. The Falcons have quality regular season wins over Cathedral Catholic, La Costa Canyon and second-seeded Poway. After playing against teams that have national-level reputations, such as Saint Ignatius Prep (CA) and Cherry Creek (CO) in very close games, the Falcons bring their own battle-readiness to the game on Saturday. This will be arguably the most interesting game to watch, as a new team in San Diego strives to make its mark against a team that aims to defend its historical honor.

This game presents yet another paradox, where the surprise team is ranked higher than the name that most San Diego lacrosse fans know very well. Valley Center has strung together an incredible season after not even having a team just four years ago. With wins over last year’s Division I champion, Carlsbad, Granite Hills and a signature road win over Poway, Valley Center seems primed to make a legitimate run at the title. We’re sure they can taste the Open Division championship after winning the Division II crown last season, just two years after winning one game in their inaugural season.

Cathedral Catholic has had a season of ups and downs, but comes into the game confidently as the fifth-seeded team. This year, the Dons own a win over the top-seeded Pacific Ridge Firebirds, a two-game sweep of second-seeded Poway and a solid win over La Costa Canyon. However, they also split a two-game series with sixth-seeded Coronado, split another two-game series with Scripps Ranch and dropped an overtime decision to Bishop’s School. If the former version of the Dons show up, it will be a high-flying game with two potent offenses going head-to-head.

The Broncos of Rancho Bernardo are another interesting story this year, as a senior-laden team seeks to lead the program back to the CIF championship. This team gave Grossmont one of its only two losses of the season and split a two-game series with Westview. They also pulled out quality wins over out-of-state opponents Grayslake North (IL) and Monarch (CO). A loss to Bishop’s School and two losses against Poway have watchful eyes on the Broncos in the playoffs, as they seek to avenge a regular-season one-goal loss to Coronado in the first round at home on Saturday night.

On the other side of the field, the Islanders come into the game looking for a repeat result of their April 23rd game against the Broncos. Their tournament resume is rather impressive, with wins over four other open division tournament teams in Torrey Pines, Poway, Rancho Bernardo and Cathedral Catholic (with whom they split a two-game series). Add in a great win over Arapahoe (CO) and a stellar performance in a two-goal loss to Saint Ignatius Prep (CA) and their ten wins start to get heavy. Being swept in the two-game series against Scripps Ranch and dropping a late-season home game against La Costa Canyon are their most notable losses. Sparks will fly in Rancho Bernardo at 7pm, as the Broncos get the good fortune of having this rematch on their home turf.

Poway rode a high-powered offense into the playoffs this season, having scored under 10 goals just six times in 20 games. It can be noted that the Titans have lost five out of those six games – which also means that they have only lost one game (Valley Center) when they have scored in the double digits. While they swept Rancho Bernardo and Westview over two games each and also beat a tough La Costa Canyon team, losses to four tournament teams (Torrey Pines, Coronado, Valley Center and two losses to Cathedral Catholic) have Poway on upset alert. They will look to earn “one more week together” at home on Saturday Night.

Santa Fe Christian comes into this game as the underdog with a great shot at winning the game. Wins over Grossmont, Westview and Valley Center are big confidence boosters going into the playoffs for a team that has also lost to Pacific Ridge and Bishop’s twice each. If the Eagles remember what earned them a five-game wining streak to start the season, it could be a dogfight that ends in their favor as they travel inland to take on the Titans at sunset.

All of the games this Saturday will be great games with teams that have all earned their spots in this year’s Open Division playoff bracket. Be sure to go to the games and show your support!