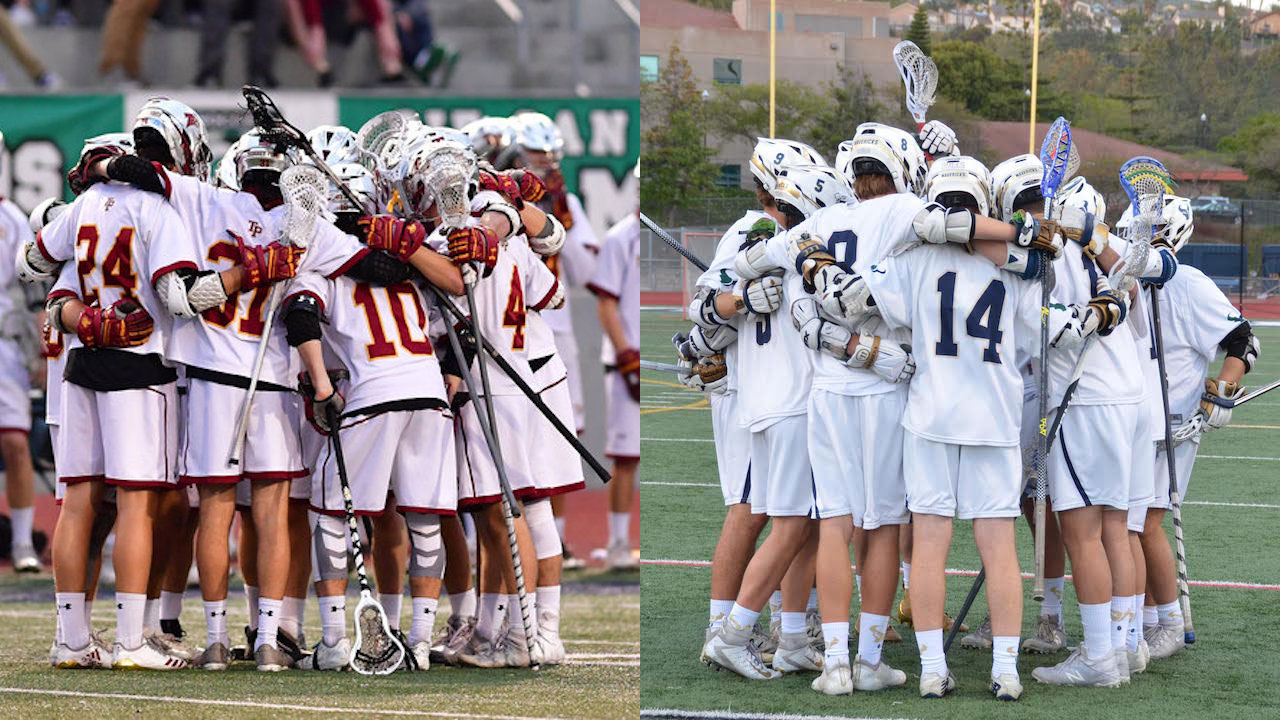 If you like bitter and intense rivalries in lacrosse you’ll want to keep an eye out for La Costa Canyon vs Torrey Pines Saturday night for the San Diego CIF Open Division title. These teams will get down no doubt. This legit rivalry is arguably the mother of all California high school lax rivalries in terms of longevity and intensity.

In one corner, we have the defending champions Torrey Pines. The Falcons enter the game with a lofty 19-2 record, a No. 2 ranking in the west and top 20 national ranking. The Falcons only two losses came early in the season to Nationally ranked St. Ignatius and IMG Academy.

Rankings watchers may see this game as a mismatch because LCC is not ranked regionally or nationally.  Don’t let that fool you, these guys can run with the big dogs. They played tough in a 12-10 loss to TP in late April and only lost to St. I by a goal back in March.  Plus this is LCC vs TP, anything can happen.

Kevin Cooper is the head coach for La Costa. The Mavericks have had some excellent coaches over the years, which helps to explain why they’re always contenders. Their two Prior to Cooper current Concordia head coach Jesse Foss ran the program, and prior to Jesse it was Dallas Hartley who has built a powerful program at Chapman University.

Jono Zissi has built a  powerful program at Torrey Pines and has made them regulars in the Open Championship game.  He’ll be going for the program’s first back to back CIF titles after winning. Torrey Pines took the title last year, La Costa the year before and Poway under coach Zach Burke defeated the Falcons in the ’15 and ’16 championship games

Offensively Torrey has been outstanding this year for coach Zissi. Alex Pistorius ( Colgate) had a big year at attack, he’s at 89 points for the year, he’ll be a factor. Miles Botkiss leads the talented midfield unit. Dodge, shoot or feed he’s a complete player.

La Costa will counter with Colin O’Conner ( Towson ) at close dee and Jorge Montgomery at shortie dee middie. The Mavericks have been known to dee up over the years, and this year has been no different.  Only La Jolla and Torrey Pines have rung up double digits on the Mavs this season.

On offense for La Costa keep an eye on JJ Sillstrop ( Denver ).  He had 11 points at attack in the semi final with 7 goals.  He’s always a threat to dominate a game. Jake Auger ( Westminster) had 6 goals and 2 assists against the Falcons in the regular season .

Torrey has talent and depth on defense. Marco Napolitano will head to Notre Dame after graduation where he will be continue the tradition of talented So Cal defenders dee’g up for Coach Byrne in South Bend. Former Falcon Chris Carter, Bishop’s alum Eddy Glazener, Hugh Crance (Corona del Mar) and Justin Cheng (Beckman) have all helped blaze the trail to South Bend.

Shortie dee middie Luke Mikilajewski will be ready as well for the Falcons.

FOGO for Torrey will be Teagan Bultman who has had a big year, he should bring it on the big stage. Bultman can change a game. He’s the real deal. For LCC they have two seniors who will battle for possession. Brett Hardin and Joe Kagan have both had strong seasons.

In goal for the Mavericks it’ll be Mitch Likens, he had his first career start in the regular season game vs Torrey, he’s been very good down the stretch. In the goal for Torrey will be Bobby Gavin ( Towson ). We first wrote about Gavin at Sandstorm his freshman year vs a talented 212 team. Now a juniorhe was in the cage vs #14 ranked Deerfield when Torrey took that game 14-7, and followed that up with an excellent outing vs Colorado power Kent Denver. With coach Zissi’s schedule, Gavin has seen plenty of big shooters, he’s a big timer.

Fan edge to be determined. It’s a night game so both sides should have maximum fans out. One thing for sure, it’ll be loud down on that field and both teams will come to play.