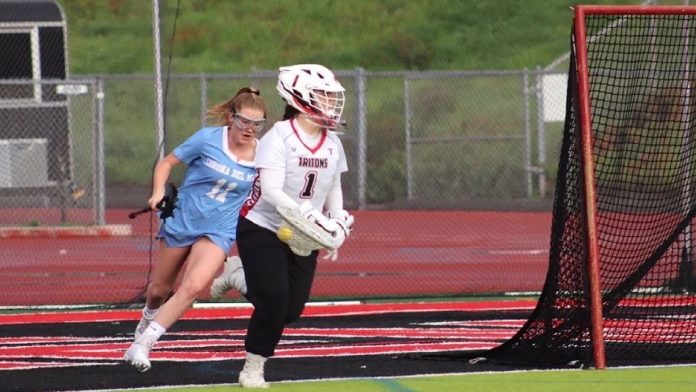 San Clemente girls lacrosse and basketball player Brookelynn Hodgin has committed to study and play NCAA Division 1 lacrosse at the University of Jacksonville. The announcement was made on Thursday.

“Jacksonville had been a school that I had been really interested in since the fall. I really loved their play style, specifically their Run and Gun. When I got in contact with the coaches, I was able to learn more about the program and the school from the inside, and knew Jacksonville was the place for me,” Hodgin said.

Hodgin, currently a junior, anchored San Clemente’s defense at the goalie position by making 28 saves this past spring and leading the team to a 5-0 record before the season was cut short because of COVID-19. In all five games, Hodgin and the Tritons held all their opponents to single-digit goals.

“Brookelynn has grown tremendously since I have seen her first pick up a lacrosse stick back in elementary school. She has especially grown over her 3 years thus far in high school. She has put in thousands of hours of individual work and training on her own in tandem with her club and high school programs. The amount of time, energy, and effort she has invested into herself has paid dividends on her current and future lacrosse abilities,” Tritons coach Josh Cain said.

Marc McCarthy, Hodgin’s goalie coach, said that she is a born leader as well as kind, considerate,
compassionate, empathetic, funny, gracious, humble and a “teammates teammate.”

“She has literally dedicated herself to mastering her craft and performing as an elite player at her current level, with a laser focus on starting for a DI program. She knows she is not there yet, the brass ring is still in play, which keeps her hungry and always hard at work,” McCarthy said.

In addition to playing lacrosse at San Clemente, Hodgin plays basketball as well. Hodgin who plays point guard, said that basketball keeps her conditioned due to the fast-paced tempo of the game.

“Brookelynn has made San Clemente better by bringing leadership, heart, and consistent play to the program. Having her come out on a quick interception or doubling ball behind the cage has created turnovers that swing the game 2 goals into our favor,” Cain said. “Lastly, Brookelynn has brought an energy to the team that has made the team want to play harder for her and vice versa them pushing her to continue to elevate her play on the field.”

Despite not knowing anyone on the Jacksonville women’s lacrosse team at the moment, Hodgin will be joined by San Marcos girls lacrosse player Brooke DeMaggio, one of her club teammates on OC Aces.

“I could not be more excited to have her on defense with me in a few years,” Hodgin said regarding DeMaggio. ” I cannot wait to be a Dolphin and play for Coach [Mindy] McCord!”

Jacksonville went 3-1 and 1-0 in the Atlantic Sun Conference last spring before the season was cancelled due to COVID-19.