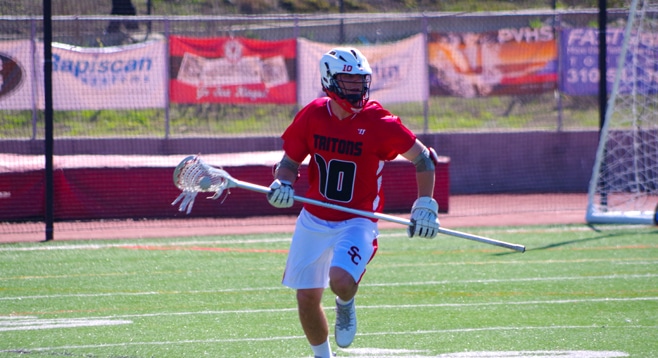 The Tritons won their fifth straight, knocking off a determined Huntington Beach team, 14-9, Wednesday night at San Clemente. The Tritons are now 5-0, while HB falls to a deceiving 0-4.

San Clemente broke out quickly with goals from Austin Streeter–who drove up from behind the cage to score a nice rip–and Collin Zines, who continued his hot hand with his second straight five goal game. Huntington Beach’s James Sidrak scored to cut the lead to 2-1 before Streeter (3 goals, 1 assist) and Zines responded for a 4-1 first quarter lead. On defense, Albany-bound SC senior Stone Sims exerted his dominance with three dazzling takeaways.

SC then outscored HB 6-5 in the second half to notch the victory as HB refused to go quietly. While the game was never in doubt, HB senior Sean Mastro had 3 goals and 2 assists and dominated facoffs winning 18 of 26 to make help the Oilers stay in it.  Adding goals for SC in the second half was Sims, who scored his first ever after four years on varsity, as well as Zines twice, Streeter, Alm and Renard. Zines had a great all-around game, adding five ground balls and four clears to the stat sheet.

San Clemente will face Corona del Mar on Friday, while HB travels to Yorba Linda on March 24 for the last of its five straight road games to open the season.

3 STARS OF THE GAME

1. Stone Sims, San Clemente, defense: The senior notched his first-ever goal despite starring on varsity for four seasons. He also have five takeaways on defense and four ground balls in a dominating effort.

3. Sean Mastro, Huntington Beach, midfield: The big man showed he’s not only a face off machine as he powered his way to three second-half goals and added two assists.