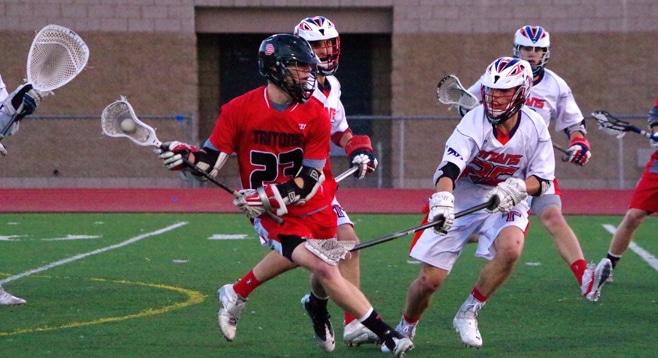 Tesoro scored the game’s first three goals as Sage DeVault (1 goal, 1 assist), Braden King and Blake Warner (1 goal, 2 assists) got the Titans started quickly. San Clemente’s Austin Lickley (2 goals) scored off a Jack Renard feed to get Tritons on the board before Brandon Mayo scored the first of his two first quarter goals–sandwiched around an Austin Streeter response for SC–and Tesoro had stormed to a 5-2 lead the end of the first quarter.

The Tritons rallied in the second, tying the game at 5-5 as Peyton Garrett (2 goals), Collin Zines and Streeter scored before senior midfielder Matt Costanzo gave Tesoro the lead again just before half. Titans junior goalie Gunner Garn had a great quarter with 6 saves (he finished with 17 on the night), while San Clemente’s defense and goalie started locking down on the Titans offense.

San Clemente came out of the halftime talk and responded to Coach Mike Hutnick’s game plan by scoring the next three–Garrett, Streeter and Lickley scoring for SC– setting up the fourth quarter drama. Costanzo cut the lead to 8-7 on a nice move around his defender on goal-line extended and rifled a lefty shot into the upper shelf past Tritons keeper Austin Boyer (9 saves on the night), and with over five minutes to play, the Titans began pressing for the game-tying goal.

But San Clemente wouldn’t be denied, as sophomore defenseman Caleb Bozarth had two impressive takeaways and clears and older brother Will Bozarth won his two draws in the quarter (won 11 of 20 face-offs) to help the Tritons score an important league road win.

STARS OF THE GAME

1. Austin Streeter, San Clemente, attack: The senior repeatedly scored important goals (three in total), getting one in each of the first three quarters to help the Tritons overcome the early deficit.

2. Gunner Garn, Tesoro, goalie: His unofficial save total of 17 while facing 34 shots was impressive, especially with the setting sun causing nightmares for both goalies.

**Note this story has been edited