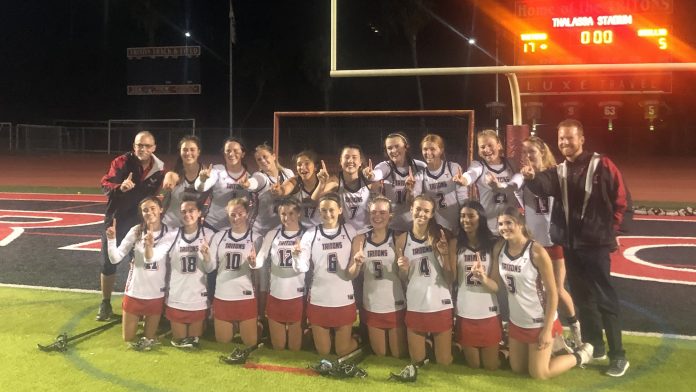 “I think she [Erickson] was igniter for us, really connecting what we’ve been working on in practice and it’s been contagious to the rest of the girls and that everyone’s working together. Tritons coach Josh Cain said.

San Clemente knew how important winning the league game was, as a loss would’ve forced them to share the league title and afterward, its fate of being the first place representative of the league would’ve been in the hands of a coinflip. The Tritons left nothing to chance as they scored the first four goals of the game and led 4-0 at the 15:17 mark, forcing a Stallions time out.

San Juan Hills didn’t get on the board until the 8:29 mark, when Emily Webster scored after it was down 6-0. With San Clemente leading 8-1, the Stallions added another goal, as Gwen Gaylord scored to make it 8-2.

The Tritons added one more goal before halftime, as Grise scored at the 2:51 mark, giving them a 9-2 lead, which eventually became the halftime score. During halftime, San Clemente honored its four seniors (pictured below from left to right) Grise, Erickson, Coury and Angela Chantaca.

Once the senior night festivities were over, the Tritons went back to work in the second half, as they scored the first four goals to put the game out of reach. To the credit of San Juan Hills, it battled to the final whistle and even stopped the running clock at one point.

After the game, the San Clemente players gave Cain an ice water bath to commemorate him being the first coach in San Clemente girls lacrosse history to lead the team to a South Coast League championship.

“This is a big step for our program. This has been a goal for a long time and I feel like we’re playing really good lacrosse. A great way to end the regular season,” Cain said.

“They [San Juan Hills] never quit. We made some adjustments, they executed the adjustments. I wish we could’ve given them [San Clemente] a better game,” Stallions coach Michael Welter said.

Welter made note that when the playoffs start, the regular season no longer matters as everyone is 0-0.

“We’re thankful and fortunate that we get to be in. This is a tough league and luckily we made our way through to get one of the bids,” Welter said.

Both teams will find out who it’ll open up the CIF-SS Division 1 playoffs with on Saturday at 11 a.m. when the brackets get released.