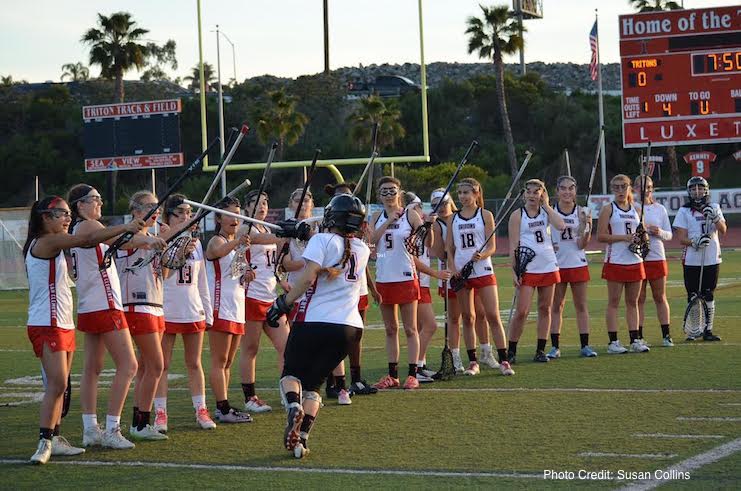 Nearing the halfway point of the season, San Clemente had only two losses, both to higher ranked teams.  On March 27th the 6-2 Tritons, ranked sixth, faced number two Trabuco Hills.  Close and heated battles over recent years yielded plenty of animosity between the two, setting the stage for an entertaining and intense matchup.

The Mustangs came out guns blazing, scoring after the first minute of play, and three minutes later added another score for a 2-0 lead.  It took 43 seconds for the Tritons’ Jessica De Collibus (junior) to respond with a goal, then both defenses bristled and the goalies got to work with some saves during a 20 shot first half shooting contest.  Six minutes of back and forth play ended when De Collibus found the back of the cage, but the Mustangs returned the favor 30 seconds later, and added another after four minutes.  The Triton’s Shay Hefft (junior) wasted no time a minute later to bring San Clemente within one.  Defense and ball control dominated the rest of the half, with the score Trabuco Hills 4, San Clemente 3.

In the second half the Tritons’ Kiley Buckley (junior) got deadly, netting three goals on four shots in the first seven minutes.

The Mustangs closed the gap to  one within a couple of minutes, but then Triton defense tightened up and forced poor shots. Trabuco was only able to capitalize on two out of ten second half shots.

With the Mustangs knocking on the door, Triton defender Catherine Yubeta (sophomore) grabbed a ground ball and the game momentum. Yubeta went coast to coast and rounded the cage for a score to give the Tritons some breathing room.

The 7-2 Tritons  head to Capo Valley  on March 29th to continue league play, followed by a well-deserved Spring Break.