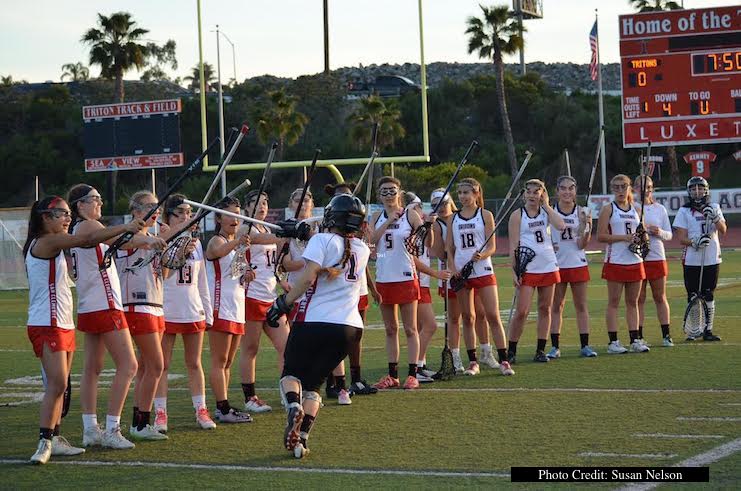 The Tritons started the game with a draw control and junior Kiley Buckley took it all the way for a rapid goal.  A minute later on a free position shot Triton junior Shay Hefft pelted the top left corner of the cage.  A minute later the Patriots offense started up and the Triton defense clogged up all lanes, but a shooting space call led to a free position goal and the Patriots were on the board.

Two minutes later Buckley dodged from the top of the eight meter and got a goal, followed by junior Jessica De Collibus  free position score.  Beckman started a three goal counteroffensive over the next six minutes, and after yielding a fast break goal San Clemente called a timeout down 5-4.

In the next two minutes the Tritons scored twice to regain the lead, but Beckman responded 30 seconds later on a great dodge to tie.  The teams traded goals again, and had a defensive stalemate for four minutes until  Beckman scored  on a free position with two minutes left.  Halftime score: Beckman 8-San Clemente 7.

Two minutes into the second half  Beckman’s shot hit the cage and after the scuffle they got a free position goal to extend their lead.  Two minutes later the Tritons pulled within one, but within a minute Beckman regained a two goal lead.

Both teams scored in the next two minutes, and then the defenses stiffened for seven scoreless minutes.  With ten minutes remaining, the Tritons roared back as senior Madison Ward fed the ball to Buckley to score, and thirty seconds later Hefft tied the game 11-11, forcing Beckman to call a timeout.

Tenacious defense frustrated the offenses for the next five minutes until Beckman dodged on a free position shot to regain the lead.  Two minutes later the Triton’s Buckley passed to De Collibus for the game-tying score.  A  Beckman mental error one minute later resulted in an offsides penalty, giving possession to the Tritons, and De Collibus passed to sophmore Delainey Iles to give the Tritons the lead with 1:44 remaining.

Beckman used its second timeout to regroup.  On the draw the Tritons got control and tried to maintain possession, but lost the ball with 25 seconds to go. Beckman raged back in a ferocious attempt to tie, and a Triton penalty gave Beckman a free position shot with 4 seconds remaining.  Triton goalie senior Veronica Petrikas made the most important save of her season, and the Tritons held on to win 13-12.

The Tritons want to commend Beckman for an extremely competitive game.

The Tritons continue their playoff run at St. Margarets on Thursday, May 4th at 4:30.