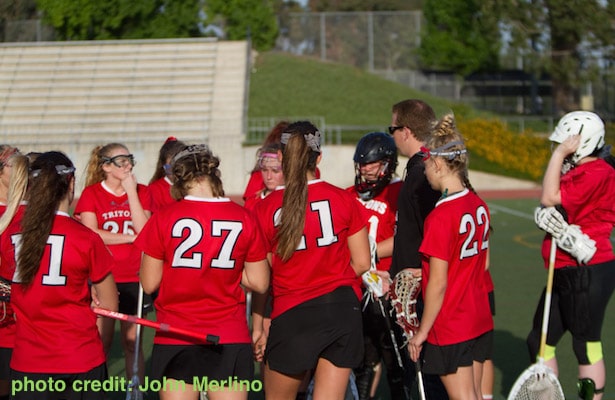 The San Clemente High School girls’ lacrosse team earned a hard fought victory in a nail biter against Santa Margarita on Friday. In a fast-paced first half, both teams cleared the ball quickly and attacked the net for good shots.   Santa Margarita’s draw control gave them an early advantage , but San Clemente tied up the game 5-5 with a minute left in the first half.

San Clemente’s draw control improved following the break, and their offense began to really find its rhythm. Two quick goals put the Tritons up by two before the Eagles drew even again at  7-7 after converting two free position shots. Five unanswered goals gave the Tritons a commanding 13-8 lead with eight minutes remaining in the game (13-8).  Santa Margarita clawed back to 13-12 and had a chance to tie with a free position and 16 seconds left in the game, but could not capitalize, and it was San Clemente who took home the 13-12 victory.

San Clemente’s Katelyn Miner was the leading scorer in the game with seven goals. Emily Twiligar scored five, and freshman Kelsey Bland had one goal.  Other Triton standouts included senior midfielder Stephanie Alpizar who took control of the draws for her team in the second half and controlled the ball movement through the midfield. Shelby Thompson stood out on defense, andAndrea (Andi) Apodoca had a standout performance in the goal.