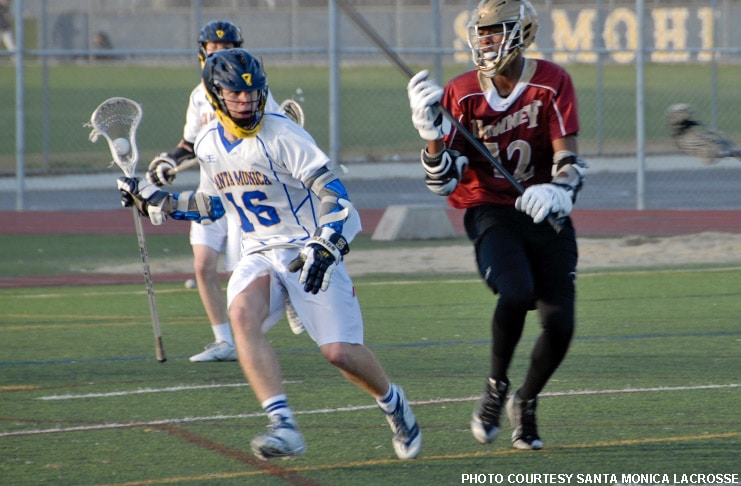 The 12th-ranked Santa Monica Vikings won two more games last week to reach double digits in wins for this breakthrough season, including Friday’s 19-3 win over visiting Downey that pushed SaMo’s record to 10-0. Last year the Vikings won their 10th game on April 29, the last game of the season.

Wednesday, Santa Monica followed up its home victory over Culver City from March 15 — the first time the Vikings had beaten the Centaurs in CIF competition — with a dominating 13-4 performance to sweep the season series.

A quick goal gave the Centaurs a 1-0 lead early, but Santa Monica responded, and by the third quarter, the game was all but decided. A dominating defensive effort, led by standout LSM Jack Hall (nine ground balls), kept Culver City in check. The Vikings’ back line of Connor Bass, Ethan Lind and Kyle Atwater continued to provide the foundation for a defense that is surrendering only 5.1 goals per game.

Friday, SaMo raced out to an 8-0 lead against a Downey team that played with great heart and determination but simply could not keep pace with SaMo’s speed and athleticism. Ten Vikings players scored goals, led by six from Kennedy and three from Kean.

Coach Ben Keiser continues to preach balance and commitment to his team.

“We’ve been successful all year as players have sacrificed personal stats for team wins,” Keiser said. “The boys understand what we need to do on offense, and they have bought into the system. The quality of our defense speaks for itself. Nothing breeds confidence more than winning, and our team is feeling very confident right about now.”

The Vikings plays Birmingham and Beverly Hills next week but have circled April 19 on their calendar. That’s when El Segundo visits for a game that might just decide the Ocean League championship.