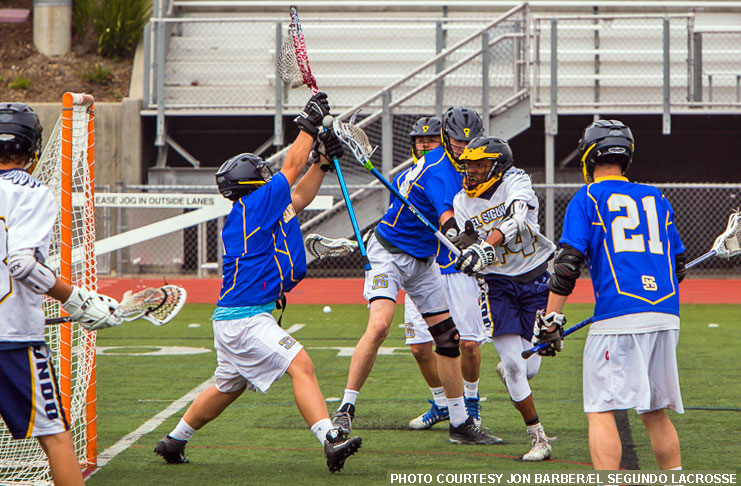 With each and every landmark victory, the No. 13 Santa Monica Vikings are starting to prove that with smoke comes fire. Wins this week over key Ocean League rivals Culver City, ranked No. 19, and El Segundo, No. 18, have the Vikings undefeated and atop the standings early in the season.

Friday’s 9-8 win over the two-time defending league champion Eagles was a bit of a change for the Vikings. The nine goals scored represented the lowest total of the season for the high-octane Samo offense. Instead, a stout defense, led by sophomore goalie Tyson Zecher and senior LSM Jack Hall, were able to get key stops at crucial moments to secure the win.

“Any time you go up against a team with a player of the caliber of Cory Lund it takes a total effort to try to slow them down,” SaMo coach Ben Keiser said. “Our boys did that today.”

Zecher was credited with 12 saves as the Vikings became the first opponent this season to hold El Segundo to single-digit scoring.

Lund finished with four goals and four assists, contributing to each of El Segundo’s eight goals, but Zecher made a key stop down the stretch as the Eagles pressed for the tying goal.

SaMo jumped out to an early 4-0 lead in the first quarter, but El Segundo found its balance and went into halftime trailing 6-3. The Vikings benefitted from a possession advantage at the face-off dot in that first period, winning 4 of 5.

The second half was a tight affair, with Samo doing just enough to keep the El Segundo attack at bay.

Clinging to a one-goal lead late in the game, SaMo senior middie Nico Balderrama forced a turnover that sealed the victory for the undefeated (8-0) Vikings.

“Nico has been The Man for us all season,” Keiser said. “I couldn’t be more proud of him and the rest of our team.”

Freshman attack Scott Melton (2g), senior middie Rory Cochrane and senior middie Daniel Ball also scored for El Segundo, and sophomore Lukas Roscoe had an assist. Senior goalie Alex Nolan was credited with either 12 or 15 saves (depending which scorebook you read), with a half-dozen of them in the fourth quarter while the Eagles rallied.

Samo has its next big test when it plays at Culver City on Wednesday. The Vikings beat the Centaurs 11-7 at home earlier this week.

El Segundo (4-2) has a league game at Downey on Tuesday, followed by two nonleague home games against ranked teams — No. 15 West Ranch on Friday and No. 17 Palisades on Monday, March 27.