Sailors and Griffins Clash in the First Round of the Playoffs 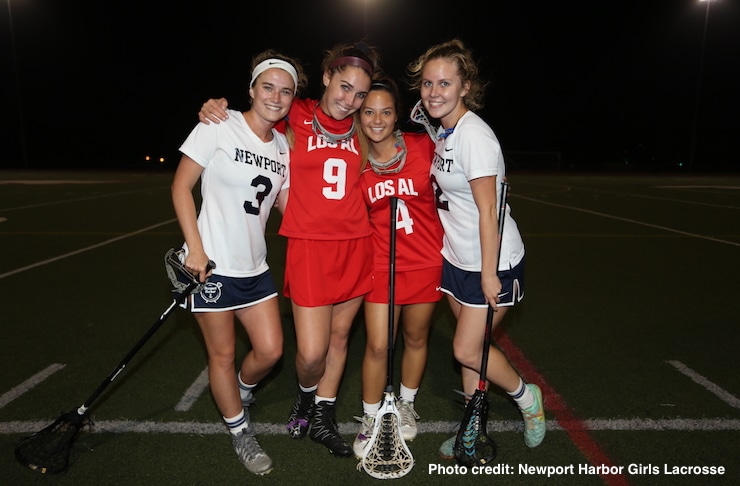 The two teams met earlier in the yea when Newport Harbor won 8-5 on April 4 at Estancia. In that game, the Sailors didn’t have senior co-captain Sarah Farley who picked up two yellow cards the game before.

Newport Harbor (11-5) will have the services of Farley and Adena Rothbard, who suffered a concussion against Los Alamitos. Rothbard made her return last Thursday against Chaminade, where she scored a goal.

“It’s going to be a challenge to get that second win. They’re a team that will play extra hard to make up for their earlier loss. We’re looking to play 50 minutes of our strongest lacrosse,” Newport Harbor coach Matt Armstrong said in an email about Los Alamitos.

Los Alamitos (5-9) on the other hand has a bit of an uphill battle, as they won’t have the services of Daisy Haas and McKenzie Shean. Both of which suffered season ending injuries.

Despite the odds, Los Alamitos coach Sophia Aragon said she is excited for a rematch against the Sailors.

“I’m confident in my girls and will have their back till the end of this season,” Aragon said in an email.

The Griffins played the Sailors close in the first match up, as the game was tied 4-4 at one point in the second half, until Newport Harbor scored four consecutive goals and held Los Alamitos without a goal until the waning seconds of the game.

One player to keep an eye on for the Griffins is Kennedi Cantrell, a senior commit to Colorado State Pueblo. Other players to watch on Los Alamitos include Victoria Hansen, Morgan Kalish, and goalie Kelsey McGrath.

Katie Hendrix, Jillian Rosten and Farley lead the charge, but keep an eye out for Laura Tran, who had eight goals last week against Tesoro and Chaminade.

The Sailors have standout wins against St. Margaret’s and Corona Del Mar, while the Griffins have a standout win against Oak Park.

Newport Harbor, which advanced to the county semifinals last year, are a No.6 seed while Los Alamitos is an 11 seed. The winner will get to play the winner of the Trabuco Hill-El Dorado game in the county quarterfinals on Thursday.