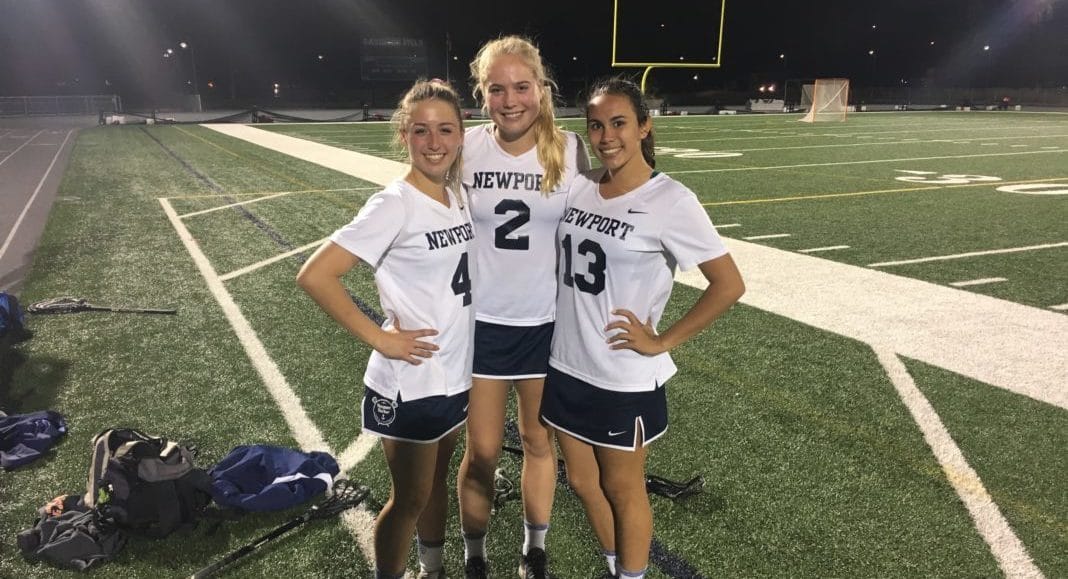 Newport Beach – The Newport Harbor girls lacrosse team handed Esperanza their first loss of the season, 15-10, on Tuesday at Newport Harbor High School.  The Sailors anxious for a win after losing three in a row came out swinging with the first four goals of the game and never looked back.

“We came out strong in the first half. It came down to making smart passes,” Newport Harbor coach Brooke Martini said.

After the Aztecs scored the first goal of the game, the Sailors scored the next four goals to lead 4-1 and force Esperanza coach Brian Eisenberg to call a time out.  The timeout did not do much to slow down the Sailors who built up a 9-4 lead by halftime.

After the Sailors built up a 12-5 lead in the second half, the Aztecs began to find their sea legs and rattled off three straight goals to close the gap and bring them within striking distance.  However, hopes for a miracle comeback were dashed when goalie Monica Silva was yellow carded with 4:25 left in the game.

“A yellow card on your goalie is pretty tough to deal with. We could’ve done some little things better. We had great moments, but Newport Harbor did a good job on the draws. We got to the ball first on draws sometimes, but we just didn’t collect the ball. Things like that, they nip you in the butt when you’re playing a good team like Newport Harbor,” Eisenberg said.

Dani Gagnon led the way for Esperanza with four goals while Mckennah Renfro had three goals. Yaya Martinez, Isabella Alfaro and Aide Martinez had one goal apiece for the Aztecs, which got six saves from Silva.

Newport Harbor played its second game without co-captain Adena Rothbard, who is out for the season with a sprained MCL and ankle. Martini hopes she can return when the playoffs start, but thinks her team had adapted well without her.

“I think we have been able to adapt without her. We [moved] a couple girls around,” Martini said. “Joelle is a phenomenal player. She is growing every single day in practice, every single game and honestly, I give her another two weeks she’s going to be unstoppable.”

The Sailors (3-5) will certainly need Joelle Rothbard’s scoring outputs when they at play Back Bay rival Corona Del Mar on Friday at 4:45 p.m. The game could get moved to Newport Harbor if CdM’s field is not in good condition due to rain. Last year, the Sailors beat the Sea Queens 9-7 last year at Peninsula Park, but could face an uphill challenge without Adena Rothbard.

“I think it comes down to playing the entire game. Coming out strong in the first half and the second half, I think that’s what’s going to make us be able to play with those top teams [Mater Dei, St.Margaret’s and Foothill],” Martini said.

The Aztecs (8-1) will look to bounce back as they have another challenge, when they play Santa Margarita at home on Thursday at 4:45 p.m. Esperanza has never been to the playoffs according to Eisenberg, but is looking to change that, as the Aztecs have standout wins against Aliso Niguel, Los Alamitos and Tesoro.

“They [Santa Margarita] got a talented squad as well,” Eisenberg said. “We just got to keep playing well. We’re doing a lot of great things. We’ll be playing some tough teams and we just got to care of the little things.”