Sailors Alex Palmer is MaxLaxOC’s Girls’ Player of the Week 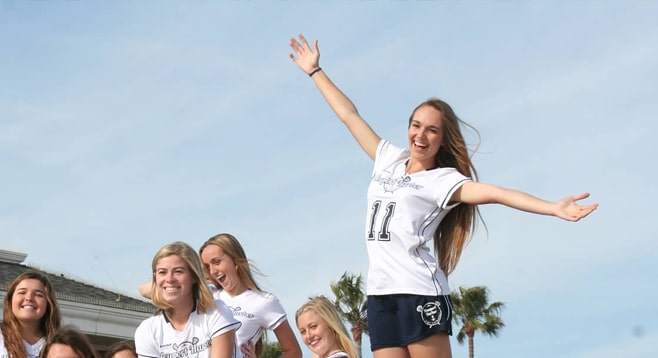 Sailor superstar Alex Palmer is MaxLaxOC’s Girls’ Player of the Week. Newport Harbor’s senior captain, Alex Palmer, has been a dominant midfielder throughout the early part of the 2014 season – and all indicators suggest that she will continue displaying masterful performances into May. The Sailors have posted a 5-1 record, earning more victories in the first six games of this season than they did in 2012 and 2013 combined. Palmer has been “The” on-the-field leader throughout the exciting run. She has opened scoring in all but one of the Sailor’s games this season, and she has been the scoring leader in all six.

On St. Patrick’s Monday, Newport Harbor High School topped El Toro 9-8; it was a meaningful victory over a team that had beaten the Sailors by ten goals in 2013. This night, Palmer was at the top of her game with three goals, two caused turnovers, two ground balls and an interception. Then on Thursday, against league opponent, Valencia, Palmer lit up the scoreboard six times, caused four turnovers, and scooped three ground balls and a draw control. Behind Palmer, Newport Harbor defeated Valencia by nine goals after losing to them twice in 2013. Palmer has averaged four goals a game and scores an astounding 67% of her shots.

But, Palmer is a player that transcends the stat book. She is a coach’s dream: someone you can put on the field and know that she will have an impact. As a captain, her quiet leadership grounds the entire Sailor team. “She is not the showy or flashy type” explains NHHS Coach Matt Armstrong. “She works hard every day, leads by example, and humbly goes about her business.” After watching a Newport Harbor game, Beckman coach Liz “LC” Connelly commented that “just when the defenders think they have her covered, she comes up with the ball, and then there’s no doubt: She is a beast.” Newport Harbor Offensive Coordinator Betsy Meyers notes that Alex’s stick is an extension of her own body.”

Palmer possesses a sixth sense that simply cannot be coached; the only thing for fans, teammates and coaches to do is to appreciate the poetry in motion that Alex Palmer brings to the field.