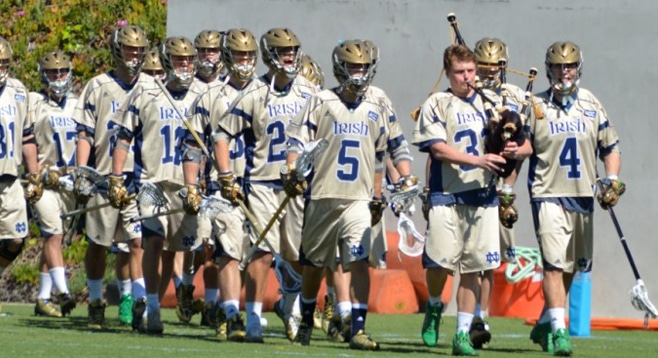 Ryan Mix, Corona del Mar High School, class of 2010, was one of the first Orange County talents to be recruited to a top tier NCAA D1 school when Notre Dame came knocking looking for the best the West had to offer. His accomplishments at Notre Dame have fueled other top schools to make the 3,000 mile journey to Southern California looking for similar talents and opened up the door for future generations of OC laxers to play for their dream school.

Mix sat down with MaxLaxOC.com and gave some insight into what it was like for him to get recruited and four years later wind up in the National Championship game.

What was your experience like getting recruited to ND?

My recruiting process was definitely different then a lot of kids on my team at ND, most of whom hailed from top high school programs back east and recognizable club teams. Throughout the whole process I never really knew where I stood among the talent around the country. When I was being recruited as a Sophomore in HS no one in the Orange County area was really being recruited to D1 schools sans for a few kids. When my teammate Noah Molnar committed to Lehigh, it lit a fire under me and I saw that it really was possible to chase my dream. Luckily Coach Byrne from ND saw me play at an Adrenaline event out here and began the communication.

What made you choose ND?

It’s sort of funny. After I went my my unofficial visit at the beginning of my junior year I was standing at the airport talking with my dad and reflecting on the weekend. I remember having the biggest smile on my face thinking about the possibility to attend the school I had just visited even though it was about 30 degrees the entire time. However, during the whole weekend I had nothing but positive experiences. It truly felt like ND was a school that cared so much about its student athletes and preparing them for not only an amazing four years but also to be extremely successful and well rounded after graduation. Only having met the coaching staff and guys on the team I felt as though I was already apart of the family. Notre Dame has a special feeling to it that you can really only experience by going out there, and once I did, I was hooked. I called coach right in the airport and committed.

What was it like being a student athlete, what was the time commitment like and do you think it added to your experience there?

I feel that there may be no better University in the country that handles student-athletes as well as Notre Dame. That being said, it is essentially like working a full-time physically laboring job, as well as attending one of the toughest schools in the nation. But at ND I had so many services available to me to help with this, from tutors and advisors to nutritionists and strength coaches. Finding a balance between lacrosse, academics, and social life was pretty tough, but luckily for my 50 teammates and I we all were in the same boat.

What fuels the drive you guys had that pushed you to the National Championship?

On our team we never have goals. We don’t say we are going to win this many games or conference titles. We just have one focus, and that is to get better everyday. We know that if we focus on that we will be playing on memorial day weekend. At sometimes it becomes a bit of a #griND but that is why we all came to ND. To compete at the highest levels both in the classroom and on the lacrosse field.

What was it like being a National Championship game, what was your favorite memory of it?

I’ve been fortunate to play in a lot of big lacrosse events. However, there is always a special feeling about playing in championship weekend. Knowing the culmination of every fall conditioning session and long spring practice comes down to a few more days is an adrenaline pumping emotion. Leading my team out to the field with the bagpipes for the championship game was an unreal feeling. It was crazy knowing that it would be the last game of my career win or lose, and knowing that it was the last time to play with the 50 guys I love to death behind me.

If you could give one piece of advice for an OC player trying to reach the level you did, both D1 and Nat’l Championship level, what would it be?

Never stop working and getting better. Even though you aren’t blessed with playing the best competition or opportunities as some east coast players there are certain things that are universal. Having a great stick and being in shape is a universal skill set that you can hone no matter where you are from.

Thanks Ryan and good luck with all of your future endeavours!

This year’s quarterfinal game against Albany and the Thompson trio was one of the best games you’ll ever watch, check the highlights below.