Ryan Harnisch is the Boys Lacrosse Player of the Year 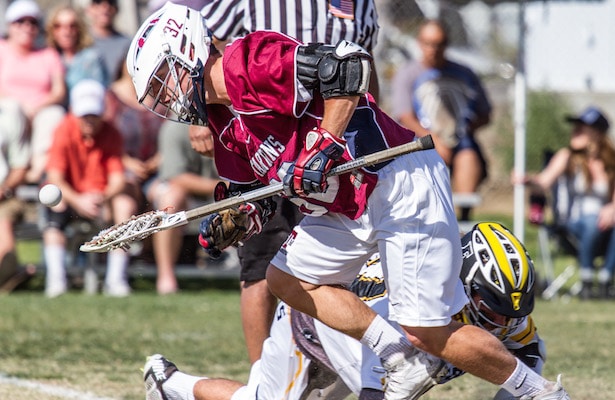 In addition to his POTY honors, this scholar athlete has raked up a pile of accolades during his high school lacrosse career: Two time All County First Team, All Trinity League Freshman year, Four-year varsity starter, 2015 US Lacrosse All American, 2015 Adrenaline All-American, All-County honors sophomore, junior, and senior year.

But beyond all that, Ryan Harnisch was patient zero, responsible for spreading Face-off Fever in Orange County and changing the game of lacrosse in the OC forever. Ryan brought awareness to the importance of the face off position. He has worked one on one with many players, of all ages and skills across the county, teaching the finer points of facing off. And Ryan helped solidify Orange County as a hotbed for lacrosse in the nation.

It’s hard to believe Ryan only first heard about lacrosse in 8th grade, when the coach of a local Huntington Beach team, the Blackhawks, came to his middle school to speak about the program. At the time Ryan was playing Jr. All American football, but his younger brother Samuel (7th grade) decided to play. Ryan went to watch some of Samuel’s games. “I figured I’d give it a try,” Ryan remembers nonchalantly. “Samuel looked like he was pretty good at it, he had stick skills down, he could go right or left, I was terrible at first,” Ryan added in his typical humble fashion.

Ryan started playing shortly after and began facing off the end of his 8th grade year. “Erik Suh showed me what a face off was – we didn’t really know exactly what we were doing.” (Suh, also a Tartan, will be starting at the X next season.)

The following summer Ryan attended Alex Smith’s Faceoff Camp where he learned all the fundamentals and face off techniques. From there, Ryan says, he worked on it himself. Hour after countless hour. Rep after countless rep. Coach Jon Muto, who faced off at Towson, began to work with Ryan as well providing invaluable feedback and fine-tuning, pushing him to new heights.

Ryan again gives credit to his brother Samuel, “My brother kept me accountable. He wants to practice more than I do. He was always saying, “Let’s go to the wall.” I wouldn’t be where I am today without Samuel.

Ryan is also quick to share his gratitude for his parents who have supported him every step of the way and his entire family – there are five Harnisch boys – for making the move to San Juan Capistrano. He describes the move from Huntington Beach to South County and St. Margaret’s as “huge.”

The hard work and dedication paid off. Ryan’s winning percentage was 80% for his high school career and this year was 85.2%.

Harnisch’s biggest inspiration was Chase Carraro who faced-off at the University of Denver and graduated 2 years ago. He not only looked up to Carraro, but also studied him. “I tried to be like Carraro. I wore his number – 32.” Ryan also liked that at only 5’7” 175 lbs. Carraro was a force to be reckoned with, both as a face-off specialist and a first line middie. Ryan is 5’9” 165, and like Carraro, not only dominates the X, but is a skilled midfielder, racking up 13 goals and 18 assists just this year.

The summer between his freshman and sophomore year, Ryan attended the Denver Camp, excited to simply meet Carraro. “I never had any thoughts about playing college lacrosse – especially D1 – I was just excited to be exposed,” explains Ryan. Upon his return, said it was “really surprising” when he received recruiting phone calls from the coaches at Denver. A few more visits to DU followed before Ryan committed his sophomore year.

As Denver’s coach Bill Tierney explained in the Denver Post, [the faceoff position] is an art within itself. And it’s a game within the game.” The one on one lightning-speed grab for possession of the ball centimeters from your opponent is not for the faint of heart. When asked what Harnisch does to prepare mentally for each face off, he answered, “I do my best to be mentally calm and respectful. I try not to be cocky. I’m zoned in on the ball. If you do your reps enough, when you hear the face off whistle it becomes second nature. You gotta have confidence. I go in and assume I’m gonna get the ball. Even if I don’t get the clamp, I’m still going to get it. “

The ball is not all he’s zoned in on. When not playing, practicing, conditioning, or watching game film, Ryan uses his keen eye and razor sharp timing behind the lens of a camera. As an avid photographer he captures possession of some of nature’s fleeting gifts – the exact moment a wave crashes onto the shore, pelicans, spreading their wings in flight just above the water’s surface, a rocky coastline a sunset. As a surfer, Ryan is comfortable not only shooting photos of the water, but also in the water. Check out Ryan’s photography Instagram account RJ.Harnisch.

Soon Ryan will trade the Pacific Ocean for the Rocky Mountains. Although we’re used to playing at sea level here, Ryan Harnisch raised the bar a mile high for all OC players. And he did so with dignity, humbleness, and respect for the game.