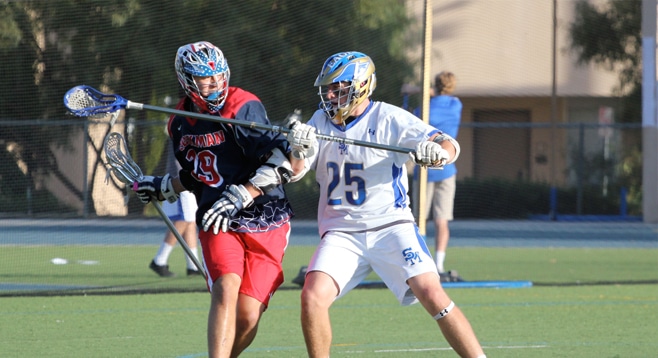 For the third time in three tries, a team from north of the El Toro Y travelled down to Rancho Santa Margarita looking for a W and went home empty handed.  Led by Hayden Ruiz’s 6 points (5 goals and 1 assist), Santa Margarita took down Beckman 13-7 to improve to 3-0.

Santa Margarita took advantage of a slow start by the Patriots and jumped out to a 4-0 lead in the first 10 minutes of the game.  Doc Dochterman (2 goals) and Lucas Mullarkey got the ball rolling with two quick goals to open the game before Ruiz started to heat up and scored his first two to make it 4-0 with three minutes to go in the first quarter.  An aggressive Eagles defense was keeping the Patriots at bay until Wesley Filipak (3 goals) decided to unleash his inner beast and force his way into shooting position for the first of his three goals to make it 4-1 at 1:21.  In what would be a recurring theme for the night, the Eagles responded quickly with Billy Senecal  (1 assist) taking the ensuing faceoff into the offensive zone where he found Zach Taylor (2 goals) on the crease to push the lead back to 4. Filipak stayed in his groove and used another power move to make it 5-2 entering the second quarter to put Beckman in the hunt.

Beckman found some life in the second quarter but could not close the gap.  Filipack finished his hat trick with more power moves and Jacob Waltz knocked one in for the Patriots after recovering a groundball on a heads up play. The Eagles matched the Beckman second quarter production with the first of Andrew Kofoed’s two goals and Dochterman’s second to make it 8-4 at halftime.

The second half belonged to Santa Margarita who just seemed to get stronger as the game progressed and outscored Beckman in the final half.  Alex Knox scored two for Beckman and Alex Malamud added one goal. Wes Schuler, Kofoed, Taylor, and Ruiz all scored for Santa Margarita to reach the 13-7 final.

Santa Margarita tries to make it four in a row when they make the short trip down to Tesoro Friday night.  Beckman hosts Huntington Beach as two Top 10 teams vie for their first win of the young season in a zero sum game.

1. Hayden Ruiz.  The future Boston University Terrier gave a clinic on what it takes to be a D1 player.  Left hand, right hand, dodge, pass, shoot… Ruiz does it all and was in peak form Wednesday night.

2.  Wesley Filipak.  When this power forward found his mojo, he was unstoppable, scoring three Patriot goals in a row.  He is a one man wrecking crew when he gets going.

3. Ravi Dhouni.  Just like he’s been doing for the past three years, Dhouni was making life heck for opposing ball carriers.  No ball is safe when it is in the Ravi Zone.