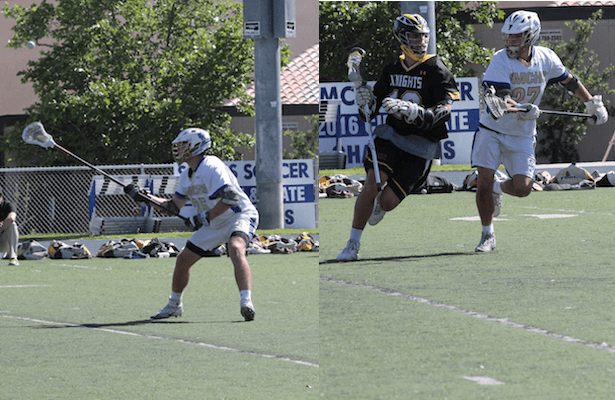 The Maxlax defensive player of the week goes to the tandem of CJ Deal and Eric Rubak of Santa Margarita Catholic High School. The duo was instrumental in wins vs JSerra and Mater Dei as well as giving a very talented Foothill team all they could handle in what could be a preview of the upcoming play-offs.

For anyone familiar with Orange county lacrosse you’ve seen these two play tough dee for years starting with youth teams. As seniors this season it is obvious they have a great appreciation for the game of lacrosse as well as great fundamentals and high lacrosse IQ’s. They honor the game with the efforts they display.

Last week they played stellar dee vs Trinity League rivals JSerra. The Lions scored 7 on the day, but only had 2 at the half before substitutions in a lopsided victory. In addition to covering 2 of the best attackmen in the area in Emerson Roth and Matt Karzak, they helped spark a blistering transition game that helped the Eagles put up 17 goals.

Two days later the Eagles held Mater Dei, another Trinity league team, to one goal as Deal and Rubak were on lockdown mode once again.

They completed their week with best their best performance on Saturday when Santa Margarita hosted Foothill. The Knights create several match up problems with their ability to switch middies and attacks. The duo had task of stopping three of the County’s most prolific scorers in Kevin Kodzis (Holy Cross), Ellis Geis (Denver)and Matt Harris. The one on one defense was outstanding from both players. In addition the double teams came fast and aggressively as they two played great help defense. In the end Foothill took it 6-4, but anytime you hold a team  like Foothill to six goals and have a good chance to win it takes individual talent as well as leadership.

Maxlax caught up with coach Adam Guy for comment on the players. “Eric and CJ have both been 3 year starters and have tremendous work ethics. Dedicated, hardworking and tenacious are words that describe them. Their enthusiasm is contagious. They do it in the weight room and one the practice field as well as schooling the younger players”

From a personal prospective I’ve had the pleasure of coaching these two as younger players. These are two  of the nicest kids you will see out there and on top of that they can really play!!!

Devin Arkison was a 3X All_American at Hobart College. He is also a member of the NJ Lacrosse Hall of Fame. He works privately to develop defensive players of all levels. His last 3 comitts are to Notre Dame, Denver and St Joes. He can be reached at d_arkison@hotmail.