Royal Moves Up in Girls Poll as Top 5 Remain Unchanged 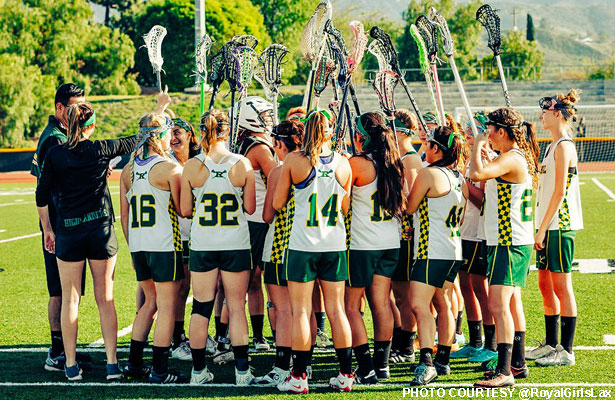 The top five teams in the US Lacrosse/MaxLaxLA Coaches Poll remained the same in Week 6 voting, but there’s a new No. 6 — the undefeated Royal Highlanders (11-0) climbed two spots and are knocking on the door of that Top 5.

Oak Park (9-1) remains the unanimous choice at No. 1, with 13 ballots cast this week, and the voting for No. 2 is between Chaminade and Redondo Union is getting closer, but the Eagles still remain the pick. Chaminade (9-3) was listed second on seven ballots and third on five, while the Sea Hawks (7-2) were listed second on five ballots and third on four, as well as fourth on two ballots. That was enough the keep the Eagles in front — for now.

But Royal, which won at Newbury Park and at home against La Canada last week, moved from No. 8 to No. 6, jumping over West Ranch (8-2) and Birmingham (9-2). The Highlanders still have to play both of those teams, as well as Cate and Dos Pueblos, before the season is out.

Speaking of Cate (5-1) and Dos Pueblos (8-2), they were the other big movers this week. Cate moved from 15 to 12 after wins over Birmingham and La Reina, and Dos Pueblos moved from 20 to 17 after beating San Marcos and Santa Barbara.