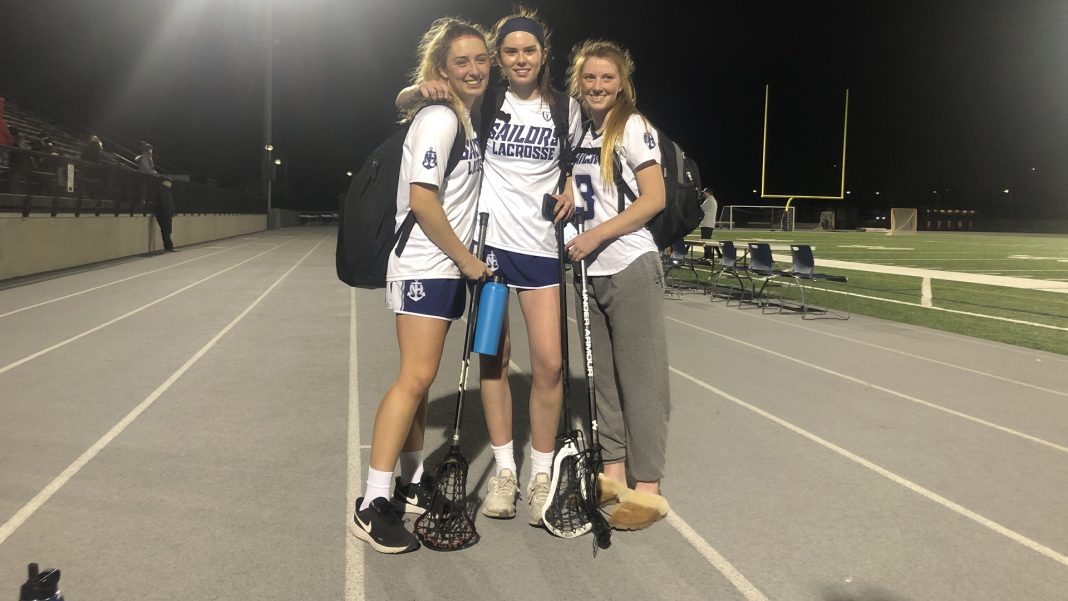 Rowdy Farmer (pictured right above) led the Sailors with six goals while Olivia Gritzmacher (pictured middle above) added five goals. Joelle Rothbard (pictured left above) scored four goals and made a little history in the process, as she scored her 100th career goal.

“Those three [Rowdy, Olivia and Joelle] are some of our strongest players, they never give up. If they make a mistake, they fight for the ball back,” Sailors coach Brooke Martini said. “We came out flat-footed tonight and once we picked up the momentum, we were able to come back.”

Early on, the Sharks were looking to pull off the upset as they took a 3-0 lead at the 19:50 mark, forcing Newport Harbor to call time out. After the time out, the Sailors scored the next seven goals to build a 7-3 lead and take control of the game.

The Sharks appeared to have regained momentum, scoring two goals courtesy of Kendall Conrad and Melia Gennell, cutting the Newport Harbor lead down to 7-5 in the waning parts of the first half. But then they turned the ball over with 11 seconds remaining, which was plenty of time for Farmer to go up the field and score a goal as the horn sounded, putting the Sailors up 8-5 at the intermission.

Newport Harbor started the second half with their collective foot on the accelerator. The Sailors rattled off five straight goals to boost their lead up to 14-7. Even Mother Nature was unable to stop the Sailors’ spurt, as the game got a little rain for a brief moment.

Santiago made one last push at a comeback by scoring three straight goals, but that was close as it would get, as Gritzmacher and Mary Jones gave the Sailors more breathing room and eventually the win. Goalie Willa Rath ended the game with five saves for Newport Harbor.

“I think this game was a big test for us. This game, our goal going into it was making sure we’re not make as many turnovers and that’s some we really have to pick up,” Martini said. “Santiago’s a great team, they’re gritty and they want that ball so badly.”

Conrad led the way for the Sharks with five goals while Alyssa Lone added four goals Gunnell and Samantha Gomez, each added one goal for Santiago, which got five saves for from Savannah Sannes and one save from Erica Koehler.

“When we book a game like this, this is without pressuring us and really extending ourselves. We learned a lot around playing such a tough defense. We’re a team that attacks from the top and they [Newport Harbor] shut us down a lot. They made us think differently to work the ball differently and find new ways to get to the net,” Sharks coach Larry Palochik said.

Up next for the Sailors (2-1), a home matchup against Mater Dei on Saturday at 10 a.m. For the Sharks (4-2), they resume Big VIII League play at Roosevelt on Saturday at 8 a.m.