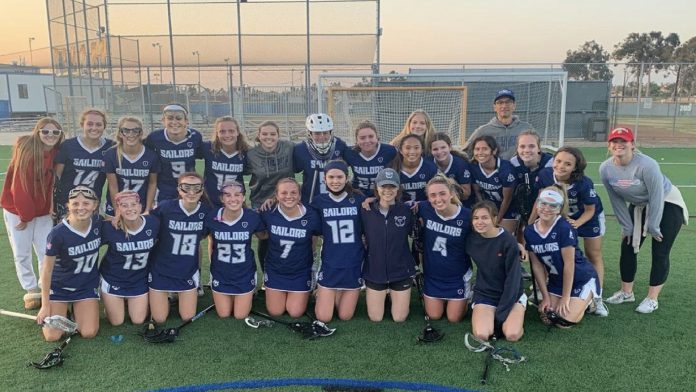 Joelle Rothbard (7 goals) and Olivia Gritzmacher (6 goals) accounted for nearly all of Newport Harbor’s offensive output in the teams’s 15-9 win over Edison Tuesday at Edison High School. Lucy Valdes had 11 saves for the Sailors. The win clinched the clinched the Sunset League title and a first round home playoff game in the upcoming CIF-SS Division 1 playoffs for the Sailors.

“I think this is huge for our team. We have some young players on the team and we have some experienced players, but as a team, we came together, we pushed through and we wanted it so bad for us,” Sailors coach Brooke Martini said.

The Chargers were led by Sydney Hoggard who had three goals while Blakely Malpass and Anna Beachner each had two goals. Melanie Wieland and Melyssa Strope both found the back of the net once for Edison, which got six saves from Cailien Gorsuch.

The Chargers went into Tuesday’s without co-captain and one of its leading goal scorers Ali Bryant, who suffered a foot injury in last Saturday’s win against Los Alamitos, as she had to play the role of an assistant coach and provide energy from the bench. Despite this, Edison showed resolve as Strope got the team on the board first almost five minutes in.

“She’s so positive and she’s so hard-working. She came out ready, she was like, ‘I just want to coach. I want to help coach, I want to do what ever I can possible.’ She’s here for the team and she’s really stepped up as a leader,” Chargers coach Olivia Smart said of Bryant.

The Sailors didn’t let that rattle them, as they responded with five straight goals, giving them a 5-1 lead and forcing an Edison time out at the 13:33 mark. The time out worked to an extent, as almost two minutes later, Beachner scored.

With Newport Harbor leading 6-2 at the 10:33 mark, it had a tough time finding the back of the net, as the Chargers’ defense kept finding ways to pressure them and turn the ball over. After Beachner scored about four minutes later making the score 6-3, neither team could score until Gritzmacher scored for the Sailors with 48 seconds, giving the Sailors a 7-3 halftime lead.

Newport Harbor scored the first two goals of the second half, as it led 9-3 at one point, but just like a majority of Edison’s games, it didn’t give up. The Chargers rattled off four straight goals with one coming from Wieland, one coming from Malpass and two straight coming from Hoggard as the Sailors’ lead was down to 9-7 at the 15:26 mark.

“Edison’s a really great team. We love playing them. Just like us, they thrive off that momentum,” Martini said.

Part of the reason the Chargers were able to get back in it was because of the success that Hoggard had at the draw control, as she was filling in for Bryant, who primarily takes the draws.

“She’s just doing her best to learn from Ali every day and continue to improve,” Smart said of Hoggard.

Malpass scored again for Edison, which only trailed 9-8, as the players and fans were ecstatic about their team closing the gap. But that was as close as they got, as Newport Harbor scored six straight goals due to winning the draw controls and the fast-paced tempo from Rothbard and Gritzmacher.

Edison didn’t get another goal until the final 30 seconds of the game when Hoggard scored her third goal. But the game had already been decided, as the Sailor players stormed the field having clinched their second league.

“Every day we learn more and more what we need to work on and I feel confident over the next week we can work on those things and we can come out really strong for playoffs,” Smart said.

Smart was proud of the way her team battled despite the circumstances. Before the game began, the Chargers honored their 10 seniors, all of which were on the inaugural varsity team back in 2017.

“This is our first class that’s played all four years, so it’s just a really special class and they’re becoming a better and better program every day,” Smart said.

Newport Harbor (13-5, 5-1 in league) close out the regular season at home against Yorba Linda on Saturday at 11 a.m. Edison (11-6, 4-2 in league) awaits to see who it will draw in the first round of the CIF-SS Division 1 girls lacrosse playoffs on Saturday at 1 p.m.