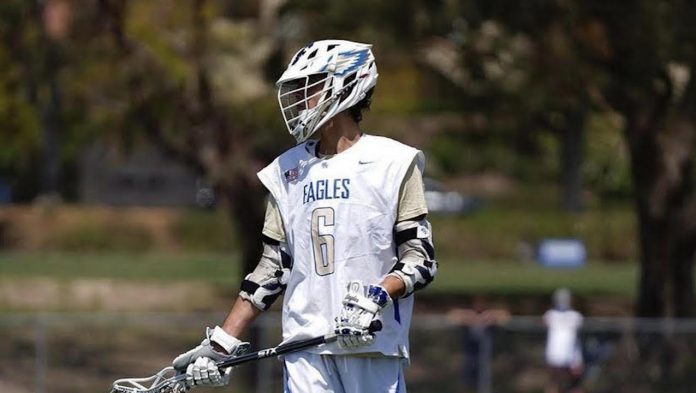 Max Roop (pictured above) had two goals and four assists, and Charlie Horvath had four goals to help Santa Margarita overcome a slow start Saturday afternoon against Trinity League rival Servite.  The Eagles were looking to rebound from their first league loss on Wednesday.  Servite entered the contest fresh off of an 11-2 win over JSerra.  The game was a back and forth affair through the first three quarters as the teams traded goals.  The Friars used a zone defense anchored by Bellarmine commit Nick Sheremetta to slow the Eagles offense.  The Eagles trailed 5-4 with 1:26 left in the third quarter after Roop scored an unassisted goal to set up what looked to be an entertaining final quarter.

The Eagles’ Ethan Messer tied the game at 5 when he scored off a pass from Roop with 8:39 left in the game.  Messer’s goal proved to be just the spark the Eagles needed.  Roop scored twenty-two seconds later when Lincoln Dodd fed him off the left side of the crease, followed by an unassisted goal from Marcus Lansing with 6:25 left.  Horvath put the game out of reach with two unassisted goals less than a minute apart from up top.  Dodd scored the sixth goal of the quarter when Roop fed him with 40 seconds remaining in the game for a 10-6 win.

While the Eagles offense stole the show in the fourth quarter, Coach Ryan Brent said the performances of senior goalie Ryan Rodas (13 saves) and faceoff specialist Zack Zahr (10 for 14) were key to the victory.  Rodas turned away shots from all over the field and Zahr manufactured extra possessions for the Eagles during their fourth quarter run.

The win moves the Eagles to 7-2 overall with a 4-1 record in the Trinity League.  The Eagles travel to Tesoro on Monday at 5:30 p.m. for a non-league game. Servite (6-7) plays Aliso Niguel on Wednesday.