Rolfes Sends Mater Dei Back to the County Finals 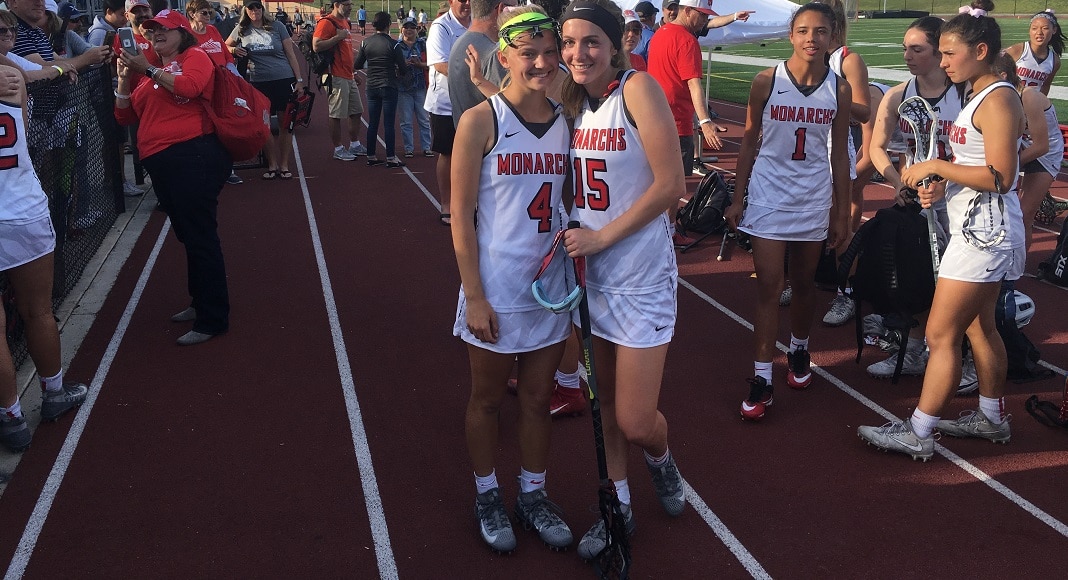 It’s been a long time since the Mater Dei’s girls lacrosse team went into overtime in a playoff game and a lot has changed. The year was 2012, Cressita Bowman was in her first year, and the overtime format was not first goal wins. The Monarchs lost that 2012 game to Santa Margarita 13-11.  On Saturday the Monarchs found the sudden victory format more to their liking.

With their season on the line in the first overtime,  Peyton Smith drew a free position and found Anna Rolfes on the crease. Rolfes buried the game-winner.

Rolfes’ goal brought an end to a compelling and dramatic game that saw a 10-8 Mater Dei lead turn into to an 11-11 tie in the final four minutes of the game as the two familiar foes battled to the very end.

Brooke Williams knotted the game at 10-10 with a pair of goals at 4:09 and 1:11. Overtime seemed imminent to nearly everybody in the stadium. Except for Gianna Danese. Groundball Gia put on her goal-scoring Gia hat and broke the tie on a fast break just 15 seconds later.  Foothill answered back 36 seconds after that when Williams earned a free position and found a lonely Ashley Stokes wide open on the crease.  Stokes did her part and tied at 11-11 to force overtime.

Foothill won the overtime draw, set up their offense, and got a good look for Brand who hit the pipe and that inch or two turned out to be the difference between victory and defeat.  Danese picked up the groundball and sent the Monarchs into transition. Eventually, the ball found its way to Smith who drew the free position to Nailon’s right.  Smith went cross-crease to the wide open Rolfes who buried the winner.

Smith and Danese led the Monarchs with three goals apiece while Tess Keiser and Rolfes had two goals apiece. Sydney Payne and Georgia Glowaki each scored once for the Monarchs, which got eight saves from Lily Molkara.

“Lily has been fantastic. She’s really come into her own skin this year, worked hard all offseason and she’s been doing private training. She soaks everything up like a sponge and we love her to death,” Bowman said.

Bowman also talked about the importance of Foothill goalie Becca Nailon to her team.

“We kept talking about how good the Foothill goalie is and so you can’t just run in one man and hope she’s not going to save it. So we talked about the dump pass and making sure we’re making her move between the pipes,” Bowman said.

Williams led Foothill and all scorers with five while Stokes and Bella Escalette each had two. Lauren Kilger and Ava Brand also scored once for the Knights, which got six saves from Nailon.

The Monarchs will look to make it a three-peat when they play St. Margaret’s on Wednesday in the county final. The Monarchs lost to the Tartans 12-10 earlier in the season, and Wednesday’s should be no less exciting.