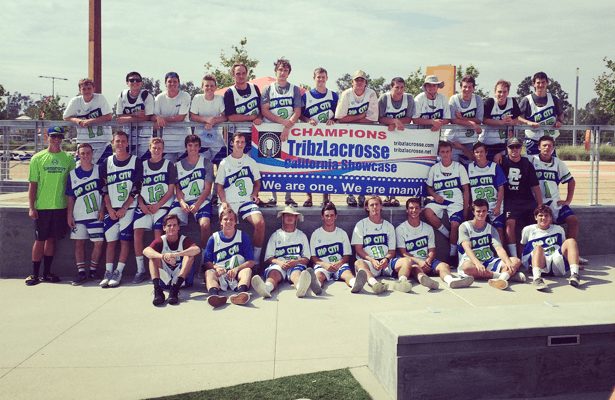 The Tribz California Showcase was ripe with talent form Orange County and other parts of Southern California. Rip City took home the marquee U-19 Championship.

With strong wins on Saturday Rip City X and Rip City, both teams were on opposite sides of the semifinal bracket Sunday. Rip City X was upset by Liv Lax (LA) after the boys from OC were beaten with the same strategy Canada employed on Team USA in the World Games. Liv Lax was able to control the faceoff and time of possession leading to a 6-6 tie at the end of regulation. Liv Lax netted the golden goal to face Rip City (who had just beaten Alpha A, SD) in the finals.

Motivated by the championship scenario, Rip City got off to a hot start. Within the first four minutes of the game and Jake Schleppy and Jake Aho each had two to put RC up 4-0. JSerra’s Logan Olmsted and Emerson Roth would add to the scoring flurry and complete the first half up 6-0.

The second half of the game would see much of the same dominance thanks to goals from Brandon Rodgers, Patrick Fallon, and Jonah Rinaldi. The final score of 10-0 was by no stretch a fluke. CdM’s Jason Simaan and Stephen Von Der Ahe and El Dorado’s Dylan Davis controlled the ball through excellent faceoffs and middie D. The uber defense of Fernando Delgado, Kennedy Solomon and Jason Brewser was never really tested and goalie Gunner Garn faced hardly any good shots on cage in the second half.

Head coach Mike Ansel realizes the privilege of coaching such a talented group, “To be able to win the tournament for the second year in a row means a lot. It’s a beautiful thing to see when so many talented players are able to come together and really gel like they did. At times I felt myself taking a step back and just watching them play, trying to take it all in. It’s pretty special…”

Congrats to the U-19 champs Rip City!