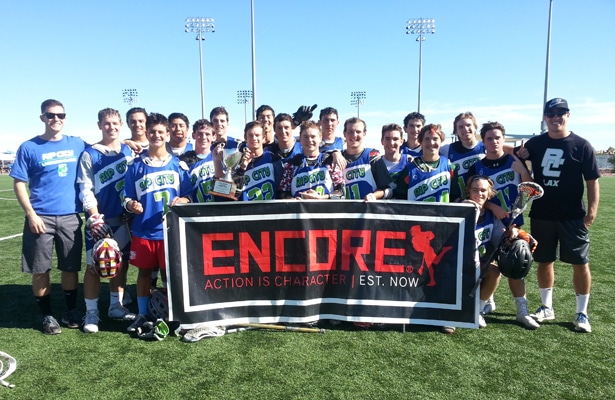 What happens in Vegas is supposed to stay in Vegas. Apparently there is an exception for lacrosse championships. For the second year in a row, Mike Ansel’s Rip City brought the Las Vegas Showcase U-19 championship back to Orange County. Following up on a 6-0 run in 2013, Rip City steamrolled the competition again this year, finishing with 4-0-1 record and outscoring their opponents 44-19.

All County attackman Jonah Rinaldi (Aliso Niguel High School) and Daniel Shultze (Huntington Beach High School) worked very well as a duo down on the attack to lead the offense. Their brand of hard physical lacrosse kept opposing defenses uncomfortable all weekend. Recent Air Force commit Nick Lemus (San Clemente High School) also added a huge spark with his quick-handle inside finishing skills, and ability to cleanup around the crease. Cayson Fincher looks like he is ready for a breakout season at JSerra Catholic High School as he played shutdown defense throughout the tournament against the opponents’ most skilled players. Fincher was a standout among a big group of talented players at the Showcase.

On Saturday, Rip City defeated Advantage 7-2 and All in Aces 10-2 before closing out the first day with a 6-6 tie against Zip It. Their 2-0-1 record earned Rip City the #1 seed for Sunday’s playoff round.

An 11-6 win in the semi-finals over Factory Lacrosse, set up a re-match against Zip It. This time the outcome was never in doubt, Rip City built up first half leads of 3-0 and then 5-1 before Harrison Evans (Trabuco Hills High School) teamed up with Rinaldi to give Rip City a five goal lead that proved to be insurmountable. Evans dodged from up top and saw Rinaldi who quickly finished. Rip City closed out the game with four more goals to earn a 10-3 victory and the tournament championship.

Ansel was proud of the way his team played, “We had a great weekend these past couple days and I couldn’t be more proud of the boys. We had an awesome group of unselfish kids who work hard. We were clicking on all cylinders. Honestly it would been hard to stop the kids, regardless of who we were playing.”