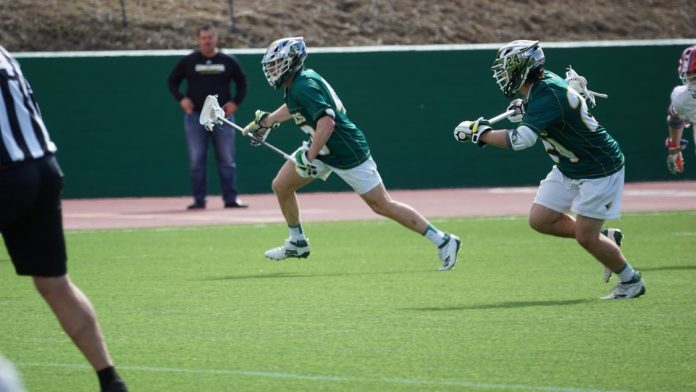 Irvine, Calif. – It has been over 11 months since the Concordia University Irvine men’s lacrosse team has stepped on the field against an opponent. However, the wait is almost over as head coach Jesse Foss has announced the 2021 schedule.

After graduating only four players from the 2020 roster and bringing in 14 new players including two NCAA transfers, the Eagles have the talent and the depth to compete with anyone. The team also boasts players from seven different states as well as Australia.
“The most exciting part of this year’s team is the depth we have at each position,” said CUI head coach Jesse Foss . This has raised the level of practice and guys are competing for their spots.”

The offense will be paced by attackman Jonah Rinaldi. Rinaldi was off to a great start in 2020 leading the team with 32 points through seven games including an 8-point (7 goals, 1 assist) performance against then-No. 1 Cal Berkeley.

“Rinaldi is the most athletically talented player I’ve coached and has the ability to take over games.”  Foss said.

The offense also returns starting midfielders Jack Fisher, Dax Allison, and Brett Masaki. Tyler Collins is making the unique jump from the team’s #1 close defenseman in 2020 to a first line midfielder in 2021.

“Collins possesses the size and skill to be a force for us on offense and will still remain a presence on the defensive end,” stated Foss. “These five will be a nightmare for opposing defenses and each bring a unique skill set to the table.”

The defense will be led by goalie Tyler Schweickert. Schweickert is a four-year starter in goal and one of the top keepers in the MCLA. He recorded 20+ saves in two games in 2020 and finished with a career-high 58 percent save percentage.

“Tyler is a natural leader that exudes confidence and has the skills to back it up,” commented Foss.

The Eagles return two thirds of their starting close defense from a year ago.  Santiago DeArmas is healthy and looking the best he has ever been. Jacob Schrup looks even more confident with a year of experience under his belt. The graduation of All-American long stick midfielder Connor Reed left a big hole in between the lines but Hayden Greco has been waiting and ready to step up to the challenge.

“The team understands all the obstacles that surround this season with the pandemic,” added Foss. “They are grateful for the opportunity to compete and I expect them to make the most of every opportunity they get.”

The Eagles open the season on Saturday, March 6 against Minnesota.  That game is scheduled to be played at a neutral site in Mesa, Ariz. The first home night game in CUI men’s lacrosse history is set to be on Saturday, March 27 against Whittier.

The season is set to conclude on Wednesday, April 21 against conference rival Chapman.  The game will also be played under the new lights on Eagles Field which will be the first “Senior Night” for the men’s lacrosse team!

CLICK HERE to check out the story on the most recent crop of new Eagles from last year’s recruiting class.