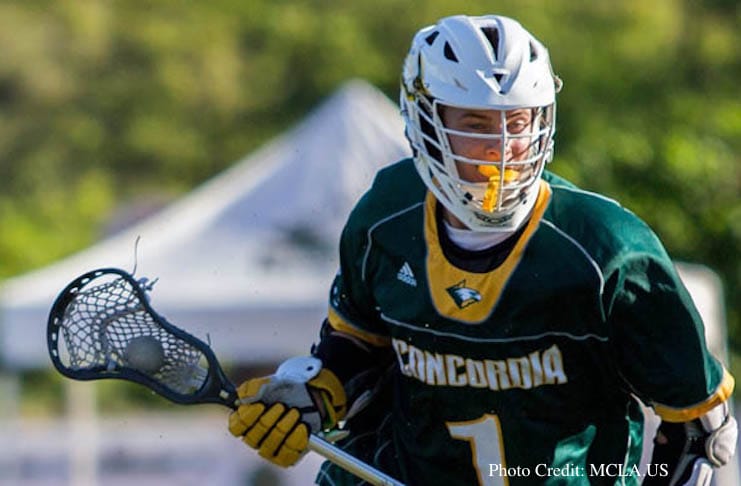 ATLANTA – Concordia-Irvine’s Jonah Rinaldi (Aliso Niguel ’15) was named the US Lacrosse MCLA Player of the Month for April.

Led by Rinaldi, Concordia-Irvine was 7-0 in April, featuring six games against ranked opponents. Rinaldi posted 23 goals and four assists in the Eagles’ run, which culminated in a Southwestern Lacrosse Conference title. Rinaldi had six goals in the title game victory over Northern Arizona.

Rinaldi, who transferred to Concordia-Irvine this season from Colorado Mesa was one of the most explosive attacks in the County during his tenure at Aliso Niguel.

Rinaldi, who transferred to Concordia-Irvine this season from Colorado Mesa was one of the most explosive attacks in the County during his tenure at Aliso Niguel.  He and Concordia-Irvine (16-1) have been installed as the No. 2 seed in the MCLA National Championship that begin Mondy at UCI. GET TICKETS NOW! to see Rinaldi and the Eagles in action against the top MCLA teams in the Country.

“Jonah has been a big time playmaker for us all year and has really come on strong down the stretch,” said Concordia-Irvine coach Ryan Brent told MCLA.us.“His ability to create offense out of nothing really helps kickstart our offense when we get bogged down. Jonah is not only a great individual player, but his unselfish team play allows us to be multidimensional in our attack.”

Rinaldi will receive a one-year membership to US Lacrosse, the national governing body of lacrosse. Membership includes on-the-field insurance coverage, discounted tickets and apparel along with a subscription to US Lacrosse Magazine.