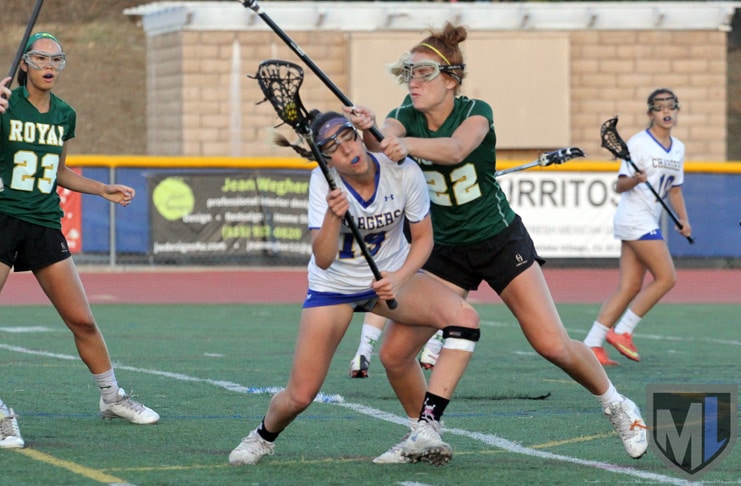 If the Agoura Chargers demonstrated anything Thursday night, it’s that they can take a punch. No. 3 Agoura held off an aggressive and physical challenge from No. 8 Royal and the loss of their leading scorer to injury to post an 8-6 victory and advance to Saturday’s semifinals of the US Lacrosse Southern Section North championship tournament.

Of course, the Chargers (14-4) began demonstrating that resiliency two months ago, when star senior Lauren Harrison went down with a season-ending knee injury. Agoura lost to Glendale, the game in which Harrison was hurt, then was blown out by Redondo Union four days later. But the Chargers regrouped and rattled off six wins in a row and now have won 11 of their last 12.

Agoura will get a rematch with No. 2 Redondo in Saturday’s semifinals. The Sea Hawks beat No. 7 Palos Verdes 19-14 to advance.

Thursday, freshman Kathryn Harrison, Lauren’s younger sister and Agoura’s leading scorer, went down with a knee injury just before halftime. And that blow came just after Royal had scored three goals in a minute and a half to tie the score 4-4.

The Chargers could have collapsed. But they didn’t.

“I didn’t have to say anything,” Agoura coach Steve Omlor told the Ventura County Star. “This happened before. We already lost Lauren. These girls know how to adjust. It didn’t take anything from me. There’s so much fight and maturity in them.”

Royal (15-4) opened the second half with its fourth unanswered goal, taking a 5-4 lead. But then Agoura turned things around. Freshman Chelsea Boots scored to tie the score, and sophomore Piper Spindle scored to give the Chargers a 6-5 lead four minutes into the second half.

That lead held for the next 12 minutes, until Boots scored back-to-back goals for an 8-5 lead with just under seven minutes to play. Boots scored four goals in the game.

Royal junior Holly Hall ripped a free-position shot past Agoura goalie Olivia Quinn to pull the Highlanders with two at the 4:24 mark, but Agoura gained possession and succeeded in running out the final minutes to clinch the win.

Saturday will be Agoura’s fourth trip to the North semifinals in the last five seasons.

No. 1 Chaminade 11, No. 8 Newbury Park 8
The top-seeded Eagles jumped out to a 6-0 lead in the game’s first nine minutes and held off the No. 8 Panthers the rest of the way. Newbury pulled within 7-5 at halftime, but Chaminade opened up a 10-6 lead midway through the second half. Again Newbury chipped away, pulling within 10-8 with eight minutes left, but the Eagles added one more and advanced to the semifinals.

No. 4 Cate 11, No. 5 Oak Park 9
The Rams remained undefeated, taking a 5-4 halftime lead and holding off the defending North champions for a narrow victory. Five different players scored for Cate (16-0), and the Rams managed to hold Oak Park senior captain and leading scorer Isabelle Campbell without a point.

According to @vcspreps, Oak Park’s Livi Fagnani scored five goals, and Yael Kaufman had a goal and three assists. Goalie Alexis Robinson made 13 saves. The Eagles finished the season 8-9.

Special thanks to Joe Curley of @vcspreps for the quote and some stats and notes.