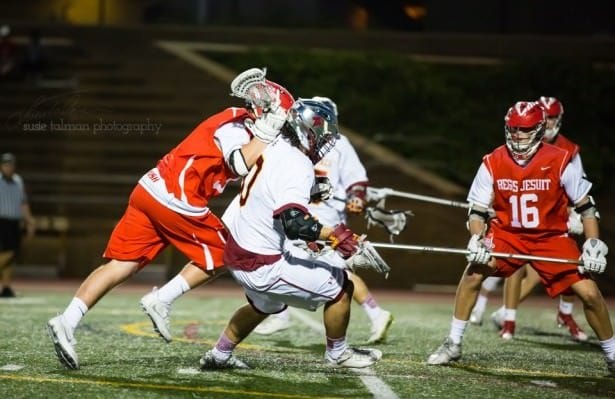 Regis Jesuit started off the scoring as Zach Rowlings picked up a loose ball in front of the Falcons net and connected for a quick 1-0 lead. Jesuit followed up with another goal from X as Mikey Bealer beat the Falcons defender to make the lead 2-0. The Falcons striked next as Marc Lefferdink took a pass from captain Ara Sukadolnik and found the back of the goal. Falcon Josh Sherman on an assist from Spencer Small scored a goal just before the end of the quarter to tie the game 2-2.

Regis Jesuit’s Zach Bodeau controlled dominated the face off battle in the first half, winning 8/10. The extra possessions paid off in the second quarter when goals by Joey Chott, Nick Ringhofer and Quentin Birch gave the Raiders a 5-2 they they would never relinquish.

Second half started quickly for the Falcons as Spencer Grant won the face off and came down and dished off a beautiful pass to Lefferdink for a goal. Regis Jesuit responded with goals by Alec Barnes and Cole Boland to make the score 7-3. Torrey Pines responded with a goal by Sukadolnik who took a pass from Evan Egan to bring the Falcons to within three. The Raiders scored two more goals in the quarter to make the score at the end of three quarters 9-5 for Regis Jesuit.

The final quarter saw goals by the Small and Egan as the Falcons fought back to make the game close. A goal by the Raiders’ Chott made the final score 10-7 for Regis Jesuit. The face off battle ended 12 – 9 for the Raiders. The difference in the game however was the battle of the groundballs. It seemed that Regis Jesuit was winning every groundball which was keeping the Falcons from getting any real momentum. For all the fans watching, it was a great high school lacrosse game between two well coached teams.