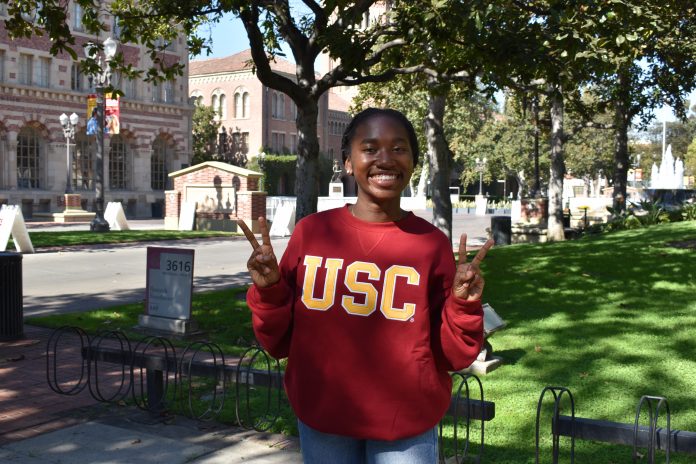 Even during a pandemic, Asjia Roberson is always working. The proof is on YouTube.

Roberson, a junior at Redondo Union, has been recording and uploading videos demonstrating what she’s been up to, which includes various stick work drills, speed drills, strength exercises, SAT prep, developing an architecture portfolio and even getting a manicure.

The highlight of her downtime isn’t on YouTube, however. The highlight is her commitment to play Division 1 lacrosse at the University of Southern California.

“I thought it was the best place for me to grow as a student and player,” said Roberson. “Being able to be a part of an elite program just made me even more excited to have the opportunity to be a Trojan. I can’t wait to compete at that high level with so many amazing players.”

Roberson, a defender, announced her commitment on Oct. 13. She’s yet to go on an official visit, but she’s been on campus for lacrosse camps and for some quick commitment photos in USC garb.

“My family and I drove to USC and we took a couple pictures with my sweatshirt on and basked in the moment of being committed,” she said.

Roberson earned a starting position at Redondo Union as a sophomore. She competed at the 2020 WPLL Future National Championship Summit on the SoCal Team and was the 2020 defender of the year on her prep team at Redondo Union.

She joins a USC program that was ranked third in the NCAA Division 1 poll at the end of a shortened season that concluded mid-March.

Sea Hawks coach Tom Borgia said that Roberson will be his best defender this season, but noted she’s also capable at midfield because of her stick skills.

“She does not have defender stick skills,” Borgia said. “Middie or attack stick skills. If I had a fifth defender I was confident in, she’d probably play half the game at midfield. If you’re going for the ball against Asjia or (midfielder) Jordan (Davis), good luck.”

Above all, Borgia is consistently impressed with Roberson’s work ethic.

“There’s no messing around,” said Borgia. “She doesn’t walk anywhere. Who’s going to be there first? Who’s out on the field? You don’t have to ask.”

Roberson credits her mindset of hard work to her parents, who are both military veterans.

Her parents have always told her that hard work trumps anything and that everything she does has to be at the best of her ability.

“No matter what has happened, maybe I didn’t have a great practice or didn’t do great with a game, they were there to re-establish that you have to work hard,” said Roberson. “If you give your best effort, it’s going to work out in your favor.”

They’ve also encouraged her to pursue architecture, something she’s shown an interest in since she was a preteen and will major in at USC.

Until she begins her studies there, she’ll keep sharpening her skills, whether lacrosse or architecture, and showing the world on YouTube.