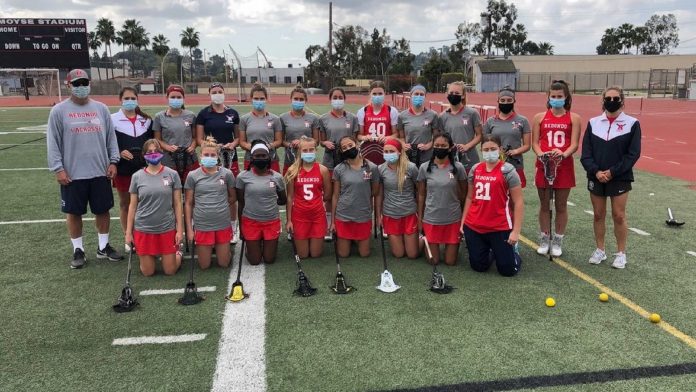 The Redondo Union girls lacrosse team was off to a 6-1 start in 2020 when COVID-19 slammed the brakes on the season, school, and life in general. Having lost only six seniors to graduation, that team returns this season largely intact and optimistic about replicating their success from last year throughout the entire season.

“I think all of the girls really appreciate the game a lot more. After last year, you just never know. We want to play every game and practice because who the heck knows what’s going to happen,” Sea Hawks coach Tom Borgia said.

The Sea Hawks kicked off their season with a 21-4 win over Glendale on Saturday at Glendale High School. Redondo Union started the season ranked No.5 in the CIF-SS girls lacrosse Division 1 poll and are ranked No.9 in the most recent poll.

Davis, bound for the University of New Hampshire, was second on the team in goals with 18, right behind Brooke Tokushige who had 19.

“My team has put in a lot of hard work in the preseason. We’re really looking forward to what we can accomplish this season. We have a lot of unfinished business,” Davis said.

Roberson, bound for USC, also is looking forward to seeing how the season progresses and what Redondo Union can do.

“I just love lacrosse in general. I just think my love for the game is what drove me and then just being hopeful to having a season,” Roberson said.

The Bay League is going to be as tough as ever, as the Sea Hawks will have stiff competition from Palos Verdes, currently 7th in the Division 1 poll. Borgia is also aware on how Mira Costa, No.10 in the Division 2 polls, has improved.

“It’s been us and PV [Palos Verdes] the last three to four year [at the top of the league],” Borgia said. “Don’t sleep on Mira Costa. PV and us are going to have their hands full with them. They’ve got a dynamite group of young girls playing there.”

Redondo Union opens up league play Thursday April 15 at Peninsula. According to Borgia, he’s never had a team, varsity or JV, that wasn’t league champion or co-champion.

“We’ve got a lot of really focused players. We’re young, but they’re quite experienced. It should be a great year. I think everyone’s just looking to get back on the field,” Borgia said.