Redondo Runs Away from Chaminade in Title Game 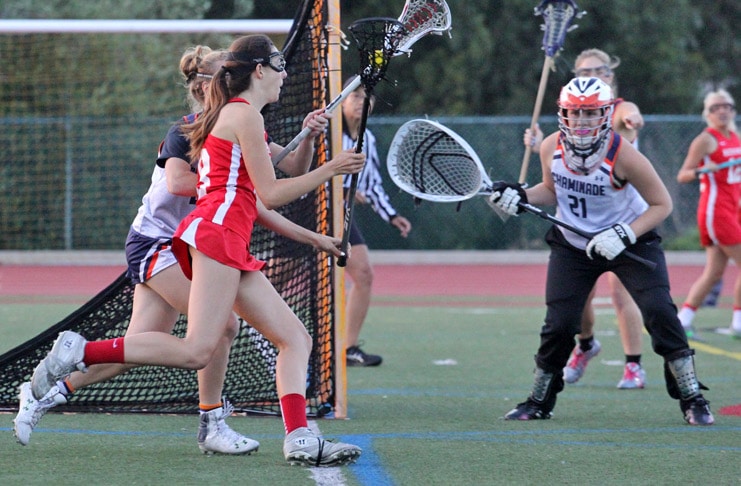 The Redondo Union girls outscored top-seeded Chaminade 9-3 in the second half to win 14-7 and claim their second US Lacrosse Southern Section North championship in the last three seasons Wednesday night at Mira Costa HS. The victory also avenged one of Redondo’s three regular season losses — Chaminade had beaten the Sea Hawks 7-3 in March.

Redondo (16-3) advances to the US Lacrosse LA/OC title game on Saturday at Palos Verdes HS (10 a.m.), where the Sea Hawks will face defending section champion Mater Dei, a 13-9 winner over Foothill in the OC title game Wednesday.

Sophomore Emma Hodges led Redondo with four goals, all in the second half, but it was the Sea Hawks’ first-half defense that set the tone. Redondo consistently ran two or three defenders at Chaminade junior Cate Mackel, driving her away from the goal and forcing her to give up the ball. Mackel had scored seven goals in a 9-7 semifinal win over Cate on Saturday, but Redondo held her scoreless in the title game.

Taking the Eagles’ best player out of the offense forced Chaminade (18-4) to look elsewhere. In the meantime, Redondo went to work. Addison Bass, Alison Shafer and Gracie Washburn each scored to give the Sea Hawks a 3-0 lead nine minutes into the game.

After a time out, Chaminade clearly had made adjustments, getting a quick goal from Hailey Schector to make it 4-1. After Shafer restored Redondo’s three-goal lead and the clock ticked under the 8-minute mark, the Eagles found a spark. Goals from Brittany Balouzian, Chiara Addendorf and Schector tied the score 4-4 with 5:19 left in the first half.

Redondo got a late goal from Brooke Tokushige and took a 5-4 lead into halftime.

Coming out of the break, though, Hodges went to work, scoring twice on free-position shots in the first 90 seconds of the second half. Redondo extended its lead to 8-4 a few minutes later, and after Addendorf pulled Chaminade back within three, Hodges promptly scored her third of the half, then assisted Tokushige for a 10-5 Sea Hawks’ lead.

With a relentless Redondo defense preventing Mackel from contributing to the offense, and the Sea Hawks scrapping for — and winning —
ground balls, Chaminade was hard-pressed to mount a comeback. The Eagles managed to get within four at 11-7 with 6:36 to play, but Bass scored twice more, and Washburn added one for emphasis.