Redondo Rides Big Second Half Back to LA Finals 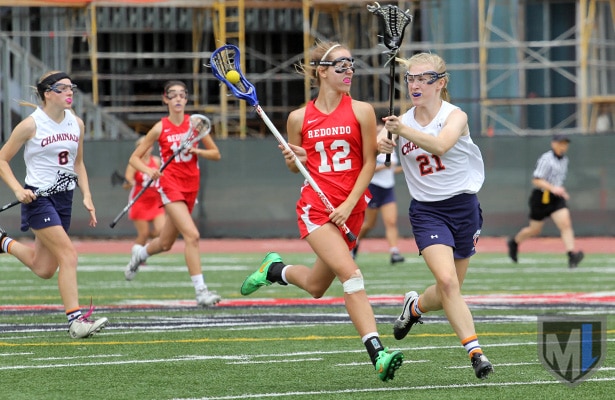 For the first 10 minutes of Saturday’s LA division semifinal at Glendale HS, it looked as if No. 2-seed Chaminade might be able to handle No. 3 Redondo Union even without injured star Emma Dawson. The Eagles led 4-1 and had an advantage in possession time. But the Sea Hawks rallied to tie 4-4 at halftime, then scored four unanswered goals to open the second half and went on to win 9-7.

Sea Hawks coach Tom Borgia couldn’t explain why his team was able to flip a switch and so suddenly change the game’s momentum, shrugging and pointing out that Redondo also trailed Mira Costa 5-1 in the early going of their final Bay League game last week before recovering and winning 8-7 in overtime. The team just keeps playing.

Saturday, senior attack Julia Brand kept Redondo in the game early, scoring two first-half goals, and senior Hailey Vorndran scored the first of her four goals with 7:06 left in the first half to pull the Sea Hawks even at 4-4.

Chaminade, which lost Dawson to a knee injury in Tuesday’s first-round playoff win over Royal, struggled to gain possession in the first 10 minutes of the second half, losing draws and ground balls, then playing solid defense but failing to clear.

The result was plenty of opportunities for the Sea Hawks, and they capitalized. Junior Caleigh Ranjo, sophomore Alison Shafer, Vorndran and freshman Emma Hodges all scored, putting Redondo ahead 8-4 before the Eagles finally had an offensive possession.

Junior Chiara Adendorff scored on that possession for the Eagles, cutting Redondo’s lead to 8-5 with 13:06 to play. It was Adendorff’s fourth goal of the game, as she shouldered much of the offensive load in Dawson’s absence.

The margin was still three goals at 9-6 after Chaminade junior Hailey Schector scored with 4:45 left, but the Eagles didn’t score again until a buzzer-beater provided the final margin.