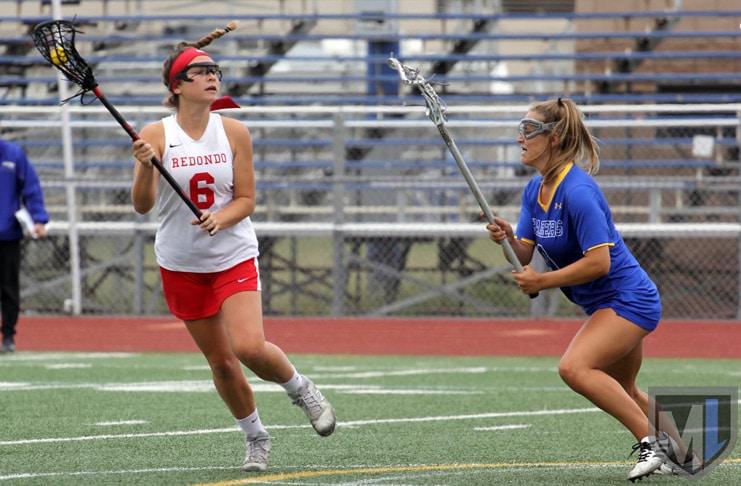 The No. 2 Redondo Union Sea Hawks trailed No. 3 Agoura at halftime and were tied 10 minutes into the second half, but a quick scoring burst and a dominant edge in possession time wore the Chargers down and secured an 11-6 Redondo victory in the US Lacrosse Southern Section North semifinals Saturday at Culver City HS.

The win advances the Sea Hawks (15-3) to the LA championship game for the third consecutive season. They will face No. 1 Chaminade, a 9-6 winner Saturday over No. 4 Cate, in Wednesday’s title game at Mira Costa HS (7:15 p.m.). Two years ago, Redondo beat Oak Park to win the LA title; last year the Sea Hawks lost to the Eagles in the title game.

For the first 35 minutes of Saturday’s semi, things could have gone either way. Agoura (14-4), which had won 12 of its last 13 games despite losing key players to injury along the way, took an early 3-1 lead. Only stellar goalkeeping from Redondo senior Melanie Paiz kept the Chargers from opening up a larger advantage.

The Sea Hawks eventually managed to gain some control, but each time Redondo made a move, the Chargers answered.

When Redondo tied it 3-3 with 10:31 to play on goals by Emma Hodges and Brooke Tokushige, Agoura sophomore Piper Spindle scored to put Agoura back on top. When Redondo took its first lead five minutes into the second half, Spindle again scored in transition off her own draw control, tying it 5-5.

But eventually Redondo made a move that the Chargers couldn’t answer. The Seahawks scored back-to-back goals to take a 7-5 lead at the 14:44 mark, then won the ensuing draw and quickly added another. A tie game suddenly was an 8-5 Redondo lead in the span of a few minutes. There still was 13:39 to play, but Agoura couldn’t recover.

Redondo controlled draws and ran time off the clock, eventually extending its lead to 9-5 with 9:04 to play. Agoura answered that one, with senior Ally Alejo finishing in transition to make it 9-6 with 8:53 left, but Redondo again won the draw and ran more time off the clock.

Spindle had four goals for the Chargers, and Alejo and freshman Chelsea Boots each scored one. Sophomore goalie Olivia Quinn made six saves.