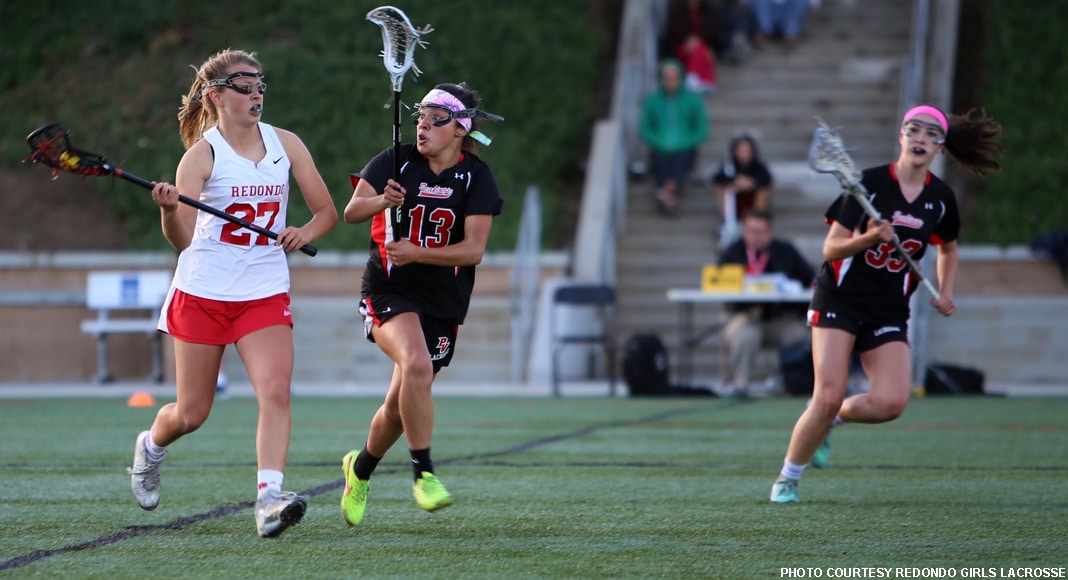 In one of the most thrilling games in their long rivalry, No. 1 Redondo Union rallied from a huge halftime deficit to edge No. 2 Palos Verdes 12-11 in an intense Bay League game Friday that their fans will not forget anytime soon.

Palos Verdes came out on fire and dominated the first 15 minutes of the game, going up 8-0. Redondo could not stop the Hoyt sisters or the PV fast break.

Redondo finally got on the board with a goal by Brooke Tokushige with eight minutes left in the first half, and Emma Hodges made it 8-2 a minute later.

The Sea Kings neverthless scored one more first-half goal with a minute left and led 9-2 at halftime, but Palos Verdes was faced with playing the second half without two of their strongest players.

Redondo capitalized, coming out of the break with a different energy and scoring the first three goals of the second half — two by Addy Bass and another by Tokushige — to make it 9-6. PV answered with a goal, but a few minutes later Hodges scored back-to-back goals in the span of 42 seconds, and Sophie Ristorcelli scored off a steal. Suddenly, the Sea Hawks were within two at 10-8.

Palos Verdes scored again to go up 11-8, but Tokushige answered, making it 11-9. PV again scored to create a three-goal cushion, but again Redondo answered, with Bass making it 12-10.

As it has all season, Redondo’s defense tightened up and held PV scoreless for the last 13 minutes while the Sea Hawks’ offense went to work, scoring three goals within a minute. Hodges made it 12-11, then Bass scored to tie it at 12-12 before Marianna Gamer scored the eventual game-winner with four minutes left.

It was a frantic four minutes, with Redondo trying to kill the clock and PV playing tough defense. After several turnovers by both teams, creating frantic ground ball situations, PV ended up with a free position shot in the last 20 seconds with a chance to tie the game. Redondo goalie Eva Lovell came up with the biggest save of her life to secure the win.

Hodges led the Sea Hawks with four goals and two assists, and she also grabbed five ground balls off the draw. Bass (4g, 1a) and Tokushige (3g) provided much of the scoring, and while Allie Shafer did not score, she had six big assist to keep the offense going. Ristorcelli had a goal and four ground balls, and Gamet had the game-winner and two assists while also controlling the draws in the second half.

Redondo is now 12-2 with two games left. Palos Verdes dropped to 10-4, with three of their losses to teams ranked in the Top 10 in either Orange County of LA. The other loss came during spring break, when most of their offense was not at the game.