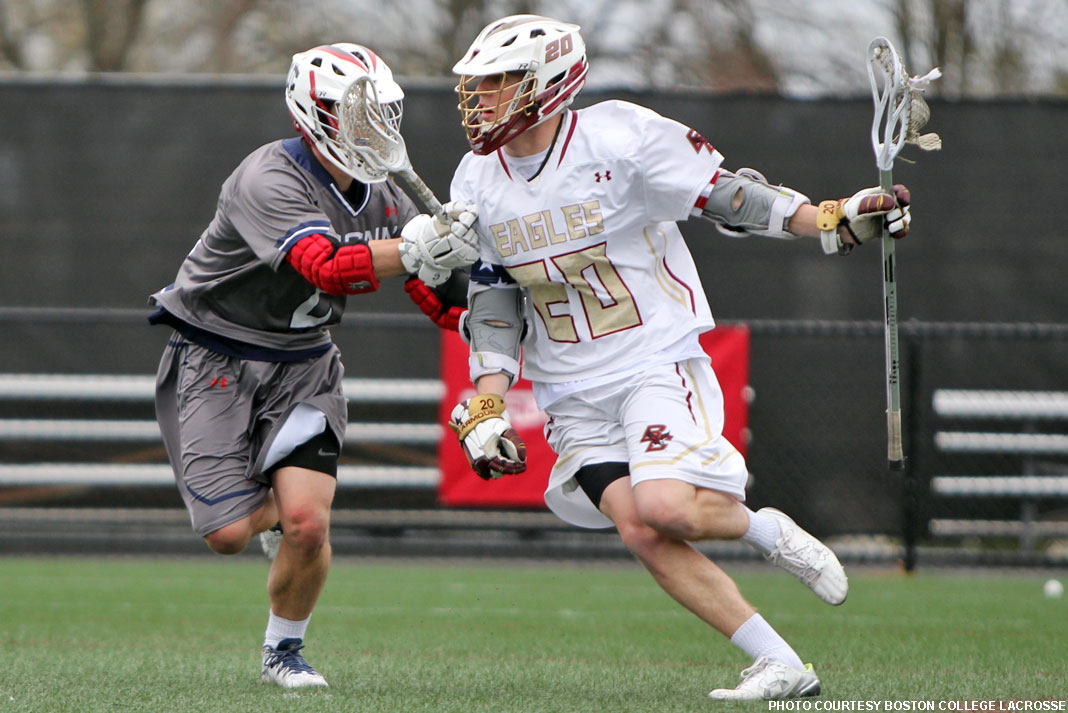 Former Cathedral Catholic attackman Nick Stiker has had a front-row seat for the Red Bandanna legacy at Boston College over the last two years as a student and a member of the Eagles’ lacrosse program.

Welles Crowther was a former Boston College lacrosse player whose trademark was a red bandanna. On Sept. 11, 2001, he was at work in the South Tower of the World Trade Center when the planes hit. He is credited with leading a number of people to safety before losing his life when the tower collapsed.

Nick Stiker, an All-City League and second-team All-CIF performer for Cathedral as a senior in 2014, knew something of Crowther’s legacy when he decided to attend Boston College. Since arriving on campus, though, he has been immersed in it. In two seasons, Stiker has played in two Red Bandanna lacrosse games and is a member of the ROTC unit Bravo Company, which renamed itself Bandanna Company in Crowther’s honor.

MaxLax asked Stiker to share his thoughts on being a part of the Red Bandanna legacy at Boston College.

Did you know about Welles Crowther and his story before you arrived at BC?

Nick Stiker: “I actually knew about Welles Crowther the spring of my senior year of high school, when I went up to visit BC. Before then and in high school, I only heard of Welles’ story through ESPN, but not in a way that I could really connect to. So I had been accepted to the school and flew out to Boston for an overnight there with an ROTC kid in the spring of 2014.

“I also scheduled this overnight conveniently when BC was playing New Hampshire in lacrosse. That game actually turned out to be the Red Bandanna game, and it was such a great atmosphere. It was the first time that I could tie in Welles’ story and really see the connection on the field. The players played with high energy; the fans showed lots of love in red bandanna gear; and then when the Crowthers went onto the field at halftime, it was an incredible moment.

“This was my first time seeing the effect that Welles’ legacy had on the team and the school, and it was something I really wanted to be a part of. Welles’ story and the way BC really lifted him up, ultimately helped make my decision to come to BC an easy one.”

You were a freshman when the BC football team wore red bandanna uniforms and beat USC. What was that like?

Nick Stiker: “The USC game was far and away the best sports moment I’ve been a part of. The red bandanna football game each year is always a special event — students will be wearing red bandannas leading up to the game, and the atmosphere is lively. For the entirety of the game, under the lights and in the rain, us fans were going crazy, waving Welles’ red bandanna. This one was for him. The outcome and the halftime honoring Welles and his parents is something I’ll never forget. I don’t know if I’ll get another chance to storm the Alumni Stadium like we did that night against USC.”

How did it feel coming from far-away San Diego and suddenly being a part of something like the Red Bandanna legacy all over BC?

Nick Stiker: “It really felt special taking part in the Red Bandanna legacy, even coming from San Diego. Most kids from BC are from the Northeast so you would think it would take a little time adjusting to everything, but I actually fit right in. People accepted me, and BC really felt like home. So taking part in that legacy just felt right, despite my West Coast roots.”

As an Army ROTC member, you obviously understand the concept of service, as did Welles. How does his story affect your commitment to service?

Nick Stiker: “Welles actually has a huge impact on my choice to serve, and I know with many others in BC Army ROTC. This past year, we renamed our company Bandanna Company from Bravo Company. Our Company Commander Pete Connell, now a Second Lieutenant, reached out to the Crowthers and asked if we could change our name to represent Welles. They gladly accepted and gave each member of BC ROTC a special red bandanna. On my ROTC backpack and school backpack, I always wear a red bandanna tied on the back.

“Also, whenever the military training gets rough or I’m sucking wind on a run, I think of Welles. He kept going back to save more people in the tower, he didn’t stop because he was tired, he put his life before others. With that mindset, every struggle in my life pales in comparison. Suck it up, and do it like Welles would do. I know that 50 or so people in Army ROTC share that same mindset.”

What was it like playing in the annual Red Bandanna lacrosse game? Was it more than a typical game?

Nick Stiker: “The Red Bandanna lacrosse game is something our team has marked on the calendars as soon as the schedule comes out in the fall. On top of the red bandanna gear, it’s always marked by the Crowthers blessing us with their time and love. I can say that that game always feels different than the rest. We’re not just playing to get a win, we’re playing for something more.

“My freshman year, we smashed UConn, and my sophomore we beat rival UNH by a couple of goals, and our level of play just rises to the occasion. There’s no other person I’d rather play for and no other team I’d rather play with.”

Order your copy of “The Red Bandanna,” by Tom Rinaldi.