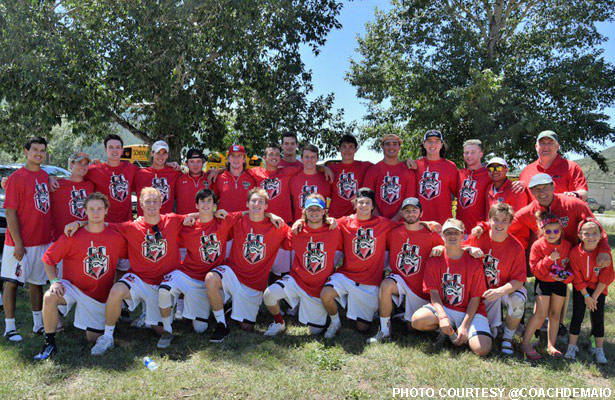 The Red Bandanas, a U-19 lacrosse squad made up of players from 10 different states and including four Southern Californians, scored with 49 seconds left in the second overtime to beat Team Colorado U19 16-15 in the championship game of the prestigious Vail Lacrosse Shootout on Wednesday.

Coached by Santa Fe Christian head coach Tom DeMaio and featuring his sons Anthony DeMaio and Nicholas DeMaio, the Red Bandanas trailed 10-9 at halftime but held Colorado to two goals in the third quarter and carried a 13-12 lead into the final period.

But Colorado rallied, scoring twice in the final five minutes, including the game-tying goal with 1:07 to play, to force overtime tied 15-15. After a scoreless four-minute first overtime, the teams went three minutes into the second OT before middie Jeremy Magno (Bergen Catholic, N.J./Harvard) scored the game-winner.

The Red Bandanas roster (below) features 22 players, including Santa Fe Christian attack David Divjak, who will play at Colorado, and Great Oak middie Jacob Yordy, who is committed to Jacksonville.

The team is named for former Boston College lacrosse player and 9/11 hero Welles Crowther and plays to honor both Crowther and all the 9/11 heroes.

The Tropics, comprised of the top committed players from Adrenaline’s club system, feature a number of Southern California players on their roster, which can be found here. They won their consolation game Tuesday, then took the fifth-place game Wednesday with a 6-2 win over 3dNE Alums.