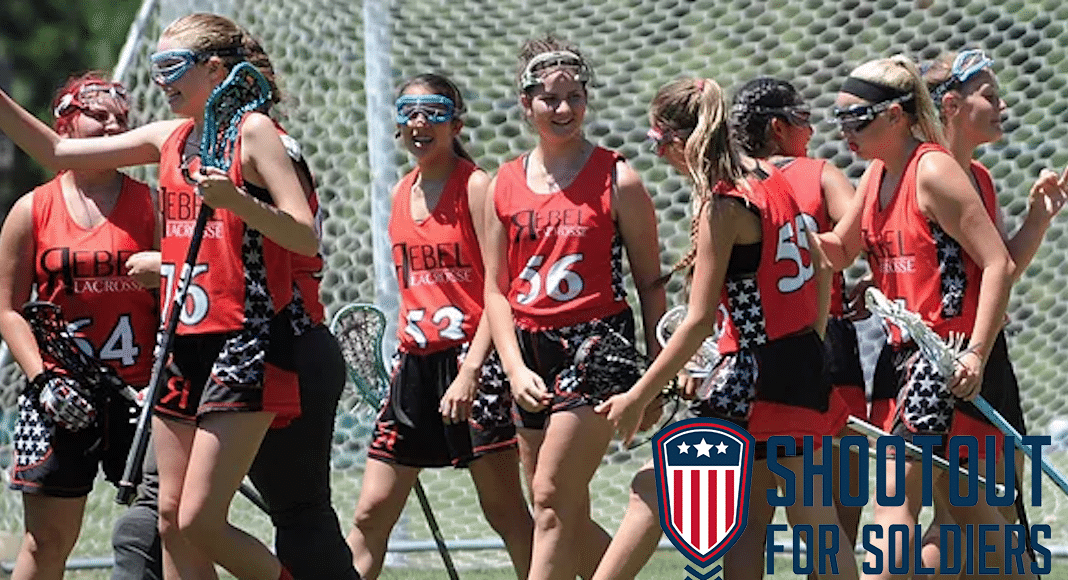 In addition to the new venue at Murrieta Mesa High School, Shootout for Soldiers California will welcome some new teams this year. One of those new teams will be the Rebels West, an offshoot of  Heather Jack’s Rebel Way Lacrosse in Las Vegas.

According to the team website, The Rebel Way was established in 2014 to provide a safe and positive environment for female lacrosse players to develop into stronger, faster, smarter athletes on the field and genuine, accountable, trustworthy individuals off the field.

Jack, an alum of Palo Verde High School in Las Vegas and the Director of the club, has a long history of starting new lacrosse programs. After high school, she started the club lacrosse team at the University of Nevada before transferring to Fresno State where she played on the school’s inaugural team and scored the first goal in program history. Jack also led the Bulldogs in scoring that season with 11 goals. Now she will bring that entrepreneurial spirit to SFS California.

Although this will be the first time Rebels West has entered a team, the team will have a blend of SFS veterans and rookies.  Ellie Hankin, a former standout goalie at Granite Hills in San Diego County, is one of the SFS veterans and she is thrilled to play with this group.

“We (Rebels West) have all played on various teams over the years and been competitors,” Hankin explained by email. “SFS gives us the chance to be teammates and simply play the game we love, the bonus of giving back makes it that much better.”

Hankin hails from a military family and if not for the military connection she may never have been introduced to lacrosse.

“I started playing lacrosse after playing in my friend’s backyard,” Hankin explained. “Our dads were stationed together in the Navy and as with many military families, holidays and weekends are spent with your military family. When I got to high school, I played field hockey and was told I should play its “sister sport”. I tried out for the lacrosse team and although I intended to play middie, my coach told me I had all the right things a great goalie needed and he made me a goalie. I have no regrets becoming a goalie. I LOVE being a goalie and leading my team on the field.”

Hankin first learned of SFS while searching for lacrosse camps online, and the opportunity to combine her passion for lacrosse with her desire to support military families proved to be irresistible to her.

“I was researching a lacrosse camp and ran across SFS online,” Hankin recalled. “After reading about it I talked to my parents, put together a team, and began fundraising. I was wrapping gifts during the holidays for a local merchant, selling ice cream during the summer and asking for donations from family and friend. Two years ago, my Navy family stepped up and helped me by donating a flag and some command challenge coins along with some other military memorabilia that I auctioned and raffled off at a large motorcycle ride for veterans.”

Hankin is continuing her fundraising effort this year .

Our team goal is $2000 and anyone can donate to our page by visiting www.shootoutforsoldiers.com and selecting Rebel West Lacrosse.

Hankin is so dedicated to the cause that she will go for the Triple Crown this year by playing, reffing, and volunteering all within the 24-hour span of the game.

“Since my Dad is a disabled veteran who served nearly 25 years in the Navy, my Mom has worked with Navy families my whole life, my oldest brother is in the Navy, and my younger brother is in the Army, and I’m the lacrosse player it is the perfect storm of sorts,” she said. “One day I too will put the uniform of our country on, but first I will be finishing my college degree in Liberal Arts. However, on August 11-12 you will find me spending my 24 hours volunteering at SFS California. Stop by and say hello!! I would love to meet everyone!!”

Hankin’s favorite SFS California memory is having her big brother who was on active duty show up to watch her play lacrosse for the first time at 2:00 am.

“Both of my brothers are in the military and have been away from home,” she said.  Last year one of them was able to attend SFS and see me play for the first time. It was awesome to have him there and have him tell me he was proud of me.”

There are many ways you can support SFS California.  To learn more about volunteering, donating, or forming a team go to https://shootoutforsoldiers.com/events/california-2018/