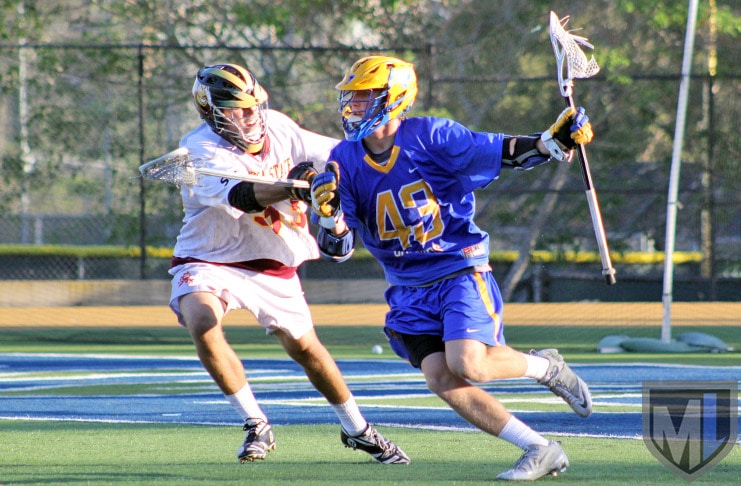 In the first weekend of wide-spread collegiate play, the MCLA will see a number of top-tier match-ups across the country, in both divisions, many of them in the Southwestern Lacrosse Conference. Here are some of the most important games to keep an eye on for fans of the SLC:

For UC Santa Barbara, this two-game road trip to the Bay Area will be a test of how real this defensive unit is. After holding UCLA to only one goal in the opener, can the defense keep freshman goalie Journ Galvin (Dana Hills) clean against two ranked opponents? The Gauchos are young, with only five seniors on the roster. The most notable of those is Casey Mix, formerly a standout for Corona Del Mar, who took a two-year hiatus from the team after a stellar freshman campaign. In the opener, Mix had 4 points (2g, 2a). However, the Gauchos are without Crespi alum Alex Dixon, (51 goals as a freshman last spring), who is taking this season off due to a heavy class load.

In Cal and Stanford, UCSB faces an MCLA Tournament qualifier from last year and a squad introducing a new coach, respectively. The Bears return four of their top five scorers from last year, along with starting goalie Bert Schmickel (7.1 GA, .595 save pct). At Stanford, Brian Karalunas, who plays professional lacrosse with the Ohio Machine, makes his debut as head coach. The team is filled with San Francisco-area products but will have a gaping hole to fill at midfield after the graduation of Peter Doyle, who was widely regarded as one of the top talents in the league. Look for senior Eric Lee to take the reigns as the new offensive leader in the midfield unit.

Fresh off of an undefeated national championship run, Orange County’s own top-ranked Chapman Panthers open the season with a tough SLC road game. Attackman Dylan Garner was the preseason favorite to take home MCLA Player of the Year honors. San Ramon Valley product Daniel Aguilar is currently in the thick of a goalie competition for starting honors.

It’s a battle of former La Costa Canyon coaches. Jesse Foss was hired to run the show for the Aztecs after more than a decade at LCC, during which he coached alongside current Chapman coach Dallas Hartley before succeeding him as head coach. San Diego State rolled in its opener, with an eight-goal victory over Claremont. La Jolla grad Troy Cummings, who had 64 points as an SDSU freshman in 2015, made a triumphant return to the field with 2 goals and an assist.

After a year that ended in disappointment, the Seminoles will be looking to recreate their momentum from a 14-1 season that didn’t culminate in a tournament appearance due to a suspension from the SELC Conference Tournament. Second-year head coach Jerry DeLorenzo, formerly a goalie at Syracuse, takes the team to the state of Arizona for the first time. It marks the start of eight consecutive games away from home.

For the Sun Devils, two California products are going to be significant playmakers to watch on the offensive side of the ball: Novato’s Tommy Carrasco, who tied for second on the team with 30 points last year, and Trabuco Hills’ Jake Marthens, who had 29 points as a freshman. Both teams need to make a statement in their openers in order to work their way up in the rankings.

In the lower Division l tiers of the conference, UCLA takes a trip to Vegas with a 1-1 record. The Bruins have been led by Loyola (Los Angeles) alum Nate Mohler, who has four points through two games. Mohler was second on the squad with 26 points last year. Three other 20-point scorers also return, including sophomore middie Dino Renna (La Costa Canyon) and senior face-off middie Jordan Robertson (Patrick Henry).

The Toreros made a big splash in their return to the Division ll ranks with a 20-3 win over Loyola Marymount to open the season. This is a team that has taken home multiple titles as a D-ll team previously, so there’s a lot of buzz that has put this program into the Top 20. The team was led in its opener by three out-of-state stars, as Drew Harvey, Chase Tornquist, and Peter Awalt combined for 22 points. It’s the opener for the Cougars, who finished 7-4 in a mostly-disappointing 2016 season. Midfielder Tanner Haupert, from El Dorado high school, heads into his junior season looking to lead this offensive unit for CSUSM.

The Titans have been second fiddle to Concordia in the SLC of late, but this is a team that has regularly been ranked in the top 15 over the past four seasons. A lot can be revealed in their quest to get over the hump as they pay a visit to another ranked team in the Southern Oregon Raiders. Freshman Garret Hoang (Aliso Niguel) had a breakout 7-point game in his debut for CSUF, a 22-1 win over Cal State Channel Islands.