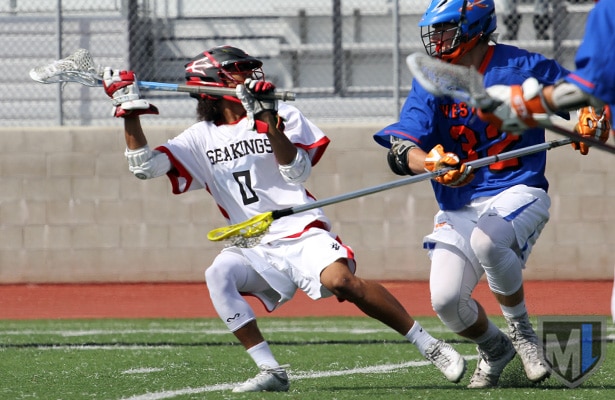 A four-year varsity starter and three-time All-Bay League performer for Palos Verdes, Smith is a versatile and dynamic player who has amassed 81 goals and 91 assists in his first three seasons. As a freshman and sophomore, he won 64 percent of the nearly 300 face-offs he took.

“Rizal is really the human highlight reel,” Borell said, “but I hesitate saying that, because there is so much substance behind the flash — I don’t want people to think he is just a fancy player.

“Yes he’s tremendously talented and has one of the quickest sticks I’ve ever seen, but he is also a vicious competitor in every drill in practice; he works extremely hard in the weight room; he’s a great teammate; and he can play every position on the field — attack, middie, face-off, and he’s actually amazing at long-pole. too. He’s a player you never have to tell to work harder. It has been my pleasure to coach him over the past four years and see him grow into the player and man he his today.”

Stevenson, located in Owing Mills, Md., is currently 1-3 and ranked No. 19 in the USILA D-III coaches poll after opening the season at No. 7. Last year, the Mustangs went 16-5 and reached the second round of the NCAA tournament. They won the NCAA D-III national title in 2013.

“Stevenson is coached by my former Maryland assistant,” said Borell, who played at Maryland from 2005-07. “He’s an old MLL and NLL pro — Paul Cantabene.”