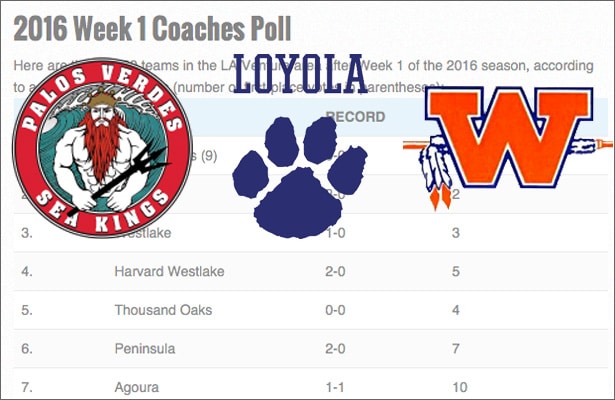 Palos Verdes, which opens its season tonight at Westlake, held on to the top spot in of the US Lacrosse/MaxLaxLA Week 1 coaches poll, but by the slimmest of margins.

The Sea Kings received nine first-place votes to eight for No. 2 Loyola, which opened its season with three impressive victories. In the preseason poll, 12 coaches had Palos Verdes at No. 1 to only four for Loyola, so it’s clear some voters took note of the Cubs’ early success. One preseason voter had Westlake in the top spot, but it seems that vote, too, has swung to Loyola.

Still, no voters have seen the 2016 version of the Palos Verdes varsity in action. This is the program that has won back-to-back US Lacrosse Southern Section North championships and certainly deserves some preseason recognition, given the roster that returns from last year.

After tonight, though, voters finally will have something more tangible to go on: The Sea Kings visit No. 3 Westlake — the team they beat in the semifinals of the North division last spring — for a 7 p.m. nonleague contest.

There was plenty of movement elsewhere in the Top 20, though. Agoura made the biggest jump among Top 10 teams, climbing from No. 10 to No. 7 after beating Crespi and taking new No. 4 Harvard Westlake to three overtimes before losing 6-5.

Chaminade, ranked No. 12 in the preseason, jumped into the Top 10 at No. 9 after wins over Oaks Christian and Orange County’s Mater Dei, along with an 11-7 loss to Westlake.

Crespi and Oak Park each dropped five spots in the poll after each opened the season with three straight losses. Crespi landed at No. 13, while Oak Park is now No. 16.