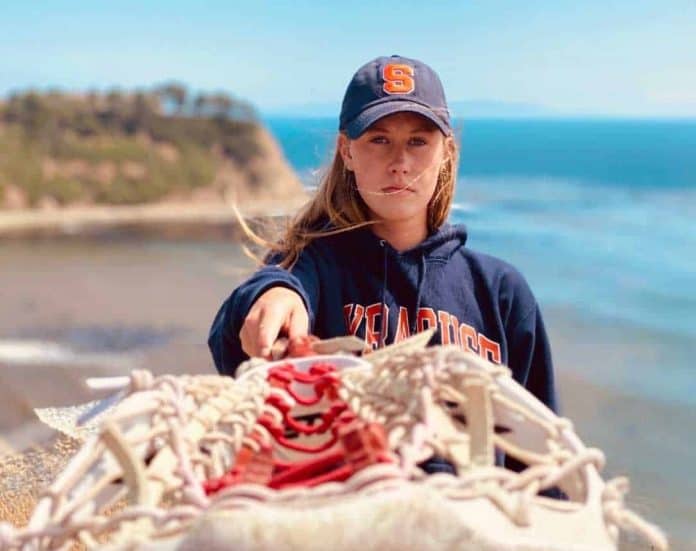 Palos Verdes’ McKenzie Olsen may have started playing lacrosse late in her athletic career, but that didn’t stop her from getting attention from some of the top college programs in the country.

On Thursday, Olsen announced her commitment to Syracuse University, which was ranked fourth in the nation in the Division 1 Inside Lacrosse poll at the conclusion of the shortened 2020 season.

“Every lacrosse girl, I feel like Syracuse is probably a dream school just knowing the history of the school and the coaching staff and the history of the program,” Olsen said. “Everything is amazing there. As I was going through my recruiting process they were always one of my top picks, so I was pretty excited they were interested in me and I really want to play for Coach (Gary) Gait and his program.”

Although the midfielder was able to accomplish a lot in a short period of time, the abbreviated season due to COVID-19 changed the recruiting process, but not necessarily for the worse.

“Unfortunately my season ended with college teams, but it gives college coaches a lot more time to talk right now in the spring than they would have been able to before. So that was probably an upside,” Olsen said. “A lot changed. I can’t really be sending my high school highlight reels. I’m sending them videos of me working out in my backyard and just talking to them a lot more.”

Olsen kept in contact with Gait as much as she could and even received a virtual tour of the Syracuse campus on FaceTime. She’ll see the school in person in July.

“His tour was five stars, though,” Olsen said.

As a kid, Olsen imagined herself playing basketball in college, not lacrosse. With a mom who played college hoops, Olsen played the sport herself from third grade until her freshman year of high school.

But by the time she reached the high school level, she was ready for something new. A friend recommended she try out for the girls lacrosse team. So she did — and made varsity as a freshman.

“Lacrosse, I would say I’m a lot more natural at it,” Olsen said. “Basketball I was playing forever and it’s also one of those things, I wouldn’t say I got tired of basketball, I wanted to learn something new and in lacrosse, there’s a lot more room for creativity. I love lacrosse and playing in the game I love the pace of lacrosse and the big field. I like running so it was a good fit for me and lacrosse.”

Although she possessed the athleticism to excel immediately in lacrosse, she had some catching up to do when it came to stickhandling. She was a defender her freshman year but had her sights set on a midfielder position.

She worked with coaches like Alyssa Leonard and Marissa Hewitt as well as PV coaches Todd Dearborn, Trenna Hill and Tricia Olsen since her freshman year. She also has sought out private lessons with Nick Tintle, a former UNC player.

“A lot of people want her to focus on defense because she’s big, big wingspan, very athletic and people would notice the stick work and maybe she should be a defender,” said PV coach Todd Dearborn. “She just didn’t have time to develop. But she stuck to her guns and said ‘Don’t pigeonhole me into being a defender or a defensive-minded midfielder. I want the ball in my hands.’”

Midfielder is Olsen’s preferred position, but she said she’d play anywhere on the field in college if it means a starting spot.

Before that, Olsen still has a senior year to complete at Palos Verdes.

“Next year I hope we have a great season and I wanted to win MVP of league this year, but we weren’t able to have that because of coronavirus,” she said. “So just having a good season overall and working for heading off to college.”