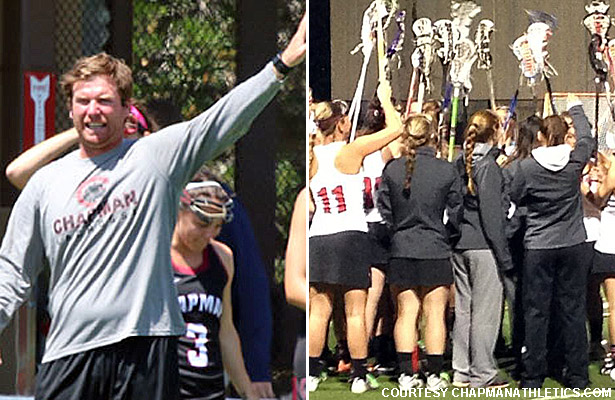 With the NCAA considering proposals to limit early recruiting, MaxLax sought reaction from a number of local lacrosse coaches at all levels — NCAA, WCLA, high school and youth.

Earlier this week, Foothill coach Kate Hick shared her opinion, which echoed that of her college coach, Kerstin Kimel of Duke, one of the leaders in the recruiting reform movement. Kimel brings her team to Orange County to face USC in the OC Winter Invitational on Feb. 20.

Kirkpatrick played lacrosse at Foothill HS and at Chapman, then served as an assistant coach with both the men’s and women’s teams for eight years. He became head coach of Chapman’s NCAA D-III women’s team last year.

“I read the article and could not agree more with it. The rules around recruiting for D-III are a bit different. Because we cannot give scholarships, we have less issues with early commits, but there is definitely pressure to contact freshman and sophomores in high school. There is a trickle-down effect. Athletes see their talented peers being recruited and committing after their freshman or sophomore year and think that’s the process.

“My opinion is that it is madness to think a 15- or 16-year-old is mature enough to know what she wants in a college experience. I worry that we have young athletes feeling pressure to commit to offers because if they don’t, they lose a roster spot to someone else [who is] ready to commit. If you haven’t already locked something up, it’s like the options are closing. It creates an atmosphere where athletes think, “I have to be recruited as a sophomore.” It makes the process speed up for everybody. Some of that is driven by coaches. Some of that is driven by athletes.

“The irony is that if the NCAA delays the process, it’s not like there are going to be less scholarships for these young ladies. They just get the opportunity to mature, develop a bit more, and hopefully make the right decision on what school to attend.”

Ramsey is head coach of UCSB’s club program and is on the board of directors of the Santa Barbara Lacrosse Association. He has coached previously at a number of NCAA institutions.

“It will be better for the young women involved to not have to decide where to go to college on the current accelerated time-line: sophomore and freshmen year in high school. I don’t think it will affect a prospect’s opportunity to play for a top program. However, it will mean that top program has to wait a while longer to fill in its class. At first coaches might feel behind, but ultimately those coaches won’t be moving on to sophomores and younger prospects so early, so it won’t feel to them like they’re behind in recruiting. All their peers will also be looking more in-depth at rising seniors.

“I can’t speak too much for specific Southern California NCAA programs about how it will affect them, but in general it might lead to more out-of-state prospects having time to mature to the point they feel comfortable leaving an East Coast haven and venturing to a school in California.”

Reilly is head coach at St. Margaret’s Episcopal and director of girls lacrosse for Victory. She played lacrosse at Princeton and was a two-time gold medalist with the U.S. National Team.

“It is satisfying to witness the premiere college coaches leading a discussion on the disadvantages of early recruiting. As a high school coach, it can be challenging to assist freshmen and sophomore players navigate early recruitment. Sometimes a player can be overlooked prematurely.

“I am in favor of a system that maximizes player development, encourages a positive recruiting experience and leads to a collegiate player that endures four years. I look forward to the coming weeks and the U.S. Lacrosse Convention, when this topic will be discussed further.”

Craycraft played at El Toro HS and University of Redlands. She was assistant coach at Redlands last year and currently is an assistant at Concordia (Irvine) while also coaching with the Victory youth program.

“There’s a pattern you notice when talking to high school students interested in playing lacrosse in college. The number of students that know what they’re interested in studying increases among each graduate class. It’s not too hard to understand. With maturity comes a greater understanding of what you like and want to pursue as a potential career. With each university offering its own strong programs and unique advantages, it’s hard to believe that a student can pick one so early, when they may not even know what they want to major in.

“One recruiting philosophy that I have, thanks to my college coach and friend Suzette Soboti, is to help the recruit throughout the process. I’ve found that taking the pressure off of the player to commit and instead offering advice concerning the recruiting process allows the student to make well-informed choices that result in a college student-athlete that is comfortable and happy where they are.

“I made my decision senior year. I can’t even imagine making a decision before then, because I changed [my mind] each year. I started thinking about playing in college junior year but didn’t put any effort into actually getting recruited. I also know that I achieved so much and had a very rich, fulfilling experience at Redlands. I wouldn’t trade that for the title of Division I. Instead, I was at a school where I felt comfortable, learned so much and had a wonderful, competitive experience.”

Messmer is a U.S. Lacrosse Coaching Education Program Trainer who has coached at various Orange County high schools for more than a decade. He recently became an assistant at Corona del Mar.

“I completely agree, and the article doesn’t even begin to address the large number of “enabling” tournaments where these younger athletes have the opportunity to showcase their early talent. Consider Sandstorm as an example, which is one of the outstanding tournaments for lacrosse in the nation. If you walk the sidelines of the younger games, you can see how easy it is for as many college coaches as can fit around the field to get a concentrated recruiting experience at all ages. Recruiting showcases for young athletes are big business. I’m not suggesting for a minute that these tournaments limit participation to just the older players, as they provide wonderful grounds for development and great bonding and personal growth opportunities, but they are an ideal venue for this early recruiting practice to be curtailed.”