No. 14 Thousand Oaks at No. 3 Harvard Westlake 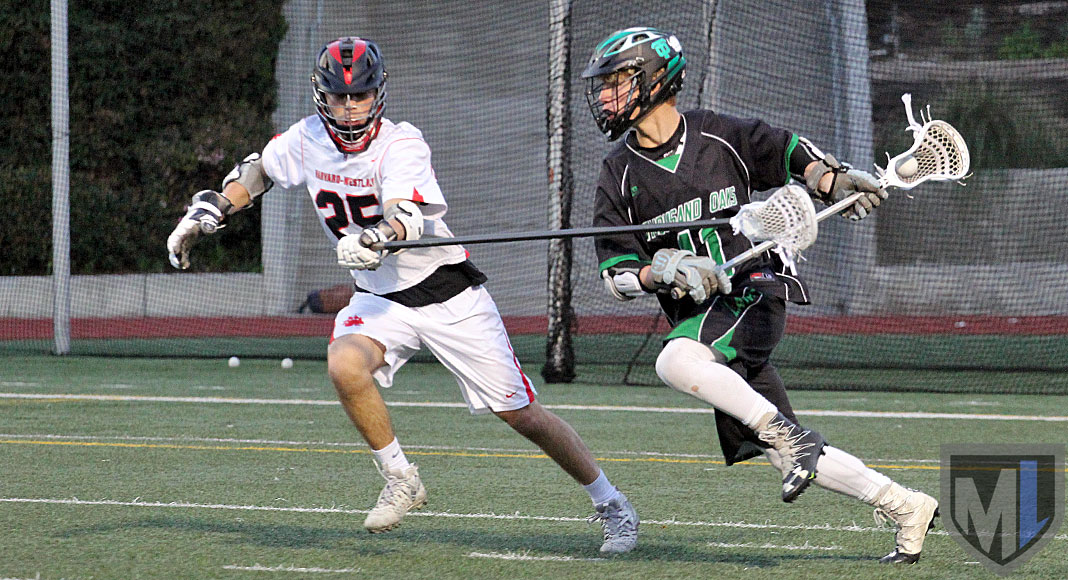 Third-seeded Harvard Westlake will play host to No. 14-seed Thousand Oaks in the first round of the US Lacrosse postseason tournament on Tuesday (4:30 p.m.) in a rematch of an early season game.

No. 3 Harvard Westlake Wolverines (9-7)
Harvard Westlake is not a necessarily deep team, but the Wolverines are athletic, relentless and physical. They advanced to the Mission League championship last week by scoring twice in the final minute to beat Chaminade 11-10. They were in that position only because earlier in the season they scored in the final minute to tie the Eagles, then beat them 9-8 in overtime. On the one hand, that speaks well to the team’s resiliency. On the other hand, it also speaks to its vulnerability.

The Wolverines win with hustle plays, winning possessions in ground-ball battles and converting those into transition and unsettled offensive chances. They have a number of players who can find the net, including senior attacks Paul Rodriguez, Reid Hudgins and Tommy Park. Junior middies Asher Early, Sultan Daniels and Harrison Listen provide plenty of scoring punch, as well.

Defensively, junior goalie Alex Russell holds down the cage behind a group of active and aggressive poles, led by senior Noah Pompan and juniors Donovan Econn and Lex Torrington. The defenders are disruptive and quick to pounce on any loose ball, generating turnovers and chaos, out of which the team’s transition offense thrives.

No. 14 Thousand Oaks Lancers (4-13)
This in not your ordinary 14th seed, nor your ordinary 4-13 team. The Lancers were voted No. 7 in the preseason coaches poll, but a combinations of injuries and an incredibly tough schedule resulted in an 0-9 record to start the season. All nine of those teams earned home games in the postseason tournament, either in LA or Orange County. In fact, of Thousand Oaks’ 13 losses, 12 came against teams in the Top 10 in either LA or OC.

But the Lancers finished strong, beating Oak Park, Calabasas and Newbury Park to close the regular season and earn a playoff berth. Their reward is a return to Harvard Westlake, where the Wolverines beat them 16-4 in February.

Offensively, the Lancers look to seniors Nick Riggio, Drew Conlon and Spencer Whinery, who missed much of the season to injury, along with junior Andrew Berg, who became eligible at midseason after transferring from Sierra Canyon. Senior face-off middie Matt Parham is a four-year starter and three-time All-Marmonte League selection.

It remains to be seen whether the battle-tested and now healthy Lancers can pull off the upset, but there is a good chance this one will be a lot closer than the teams’ first meeting.