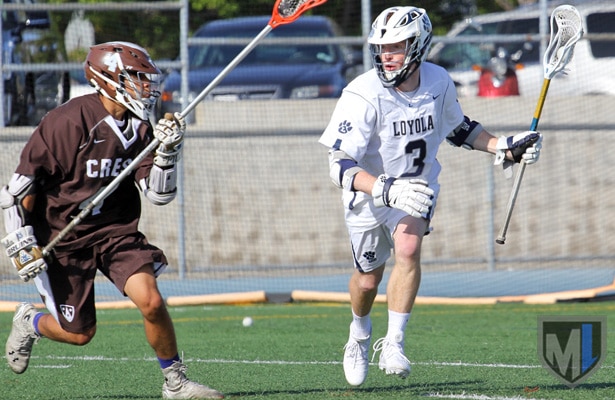 Loyola senior Sean Smith was named 2016 Mission League Player of the Year and first-team All-Mission attack this week, his third consecutive season as a first-team all-league selection. He was one of 13 Loyola players honored, including nine underclassmen and eight players who made all-Mission last season.

The Cubs, who became the first Los Angeles team to beat the Orange County champion and win the Southern Section title, went 20-4 this season, including 8-0 in the Mission League.

Smith, who will play at Connecticut College next year, junior goalie Joe Theuer and junior defenders Nick Mohler and Niko Econn were all named to the all-league team for the third time. Econn earned the honor twice at Harvard Westlake before transferring to Loyola this season.

Harvard Westlake, which was runner-up in league play, placed five players on the all-league team, including three-time selection Philip Thompson, a senior midfielder and face-off specialist who will play at Princeton next year. Junior defender Shane Houska was named all-league for the second year in a row.

St. Francis senior attack Evan Swayne, who will play at DePauw University, made the second team this year, and junior defender Jim Murphy made the first team.

Crespi’s Jack Doyle was named to the second-team at attack after being a second-team midfielder last year. Originally committed to play at NCAA D-I St. John’s, Doyle said recently he instead will enroll in the Gateway Program at Holy Cross College in South Bend, Ind., with plans to transfer to Notre Dame as a sophomore. He is hoping for an invitation to walk on to the Fighting Irish lacrosse team.