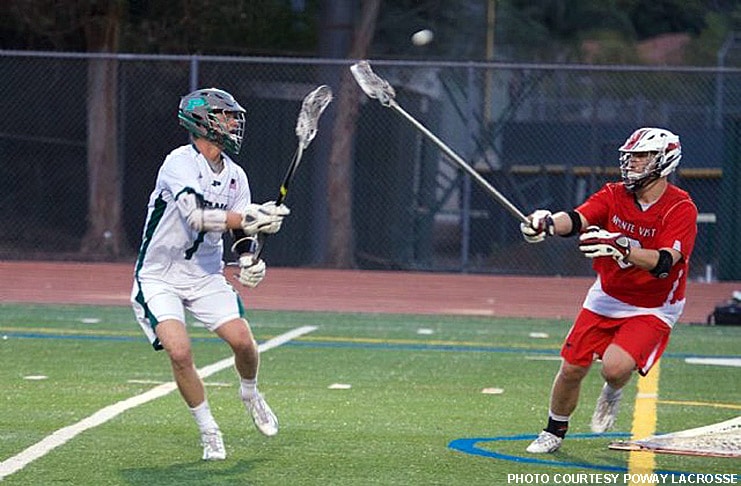 Exciting come-from-behind victories and buzzer-beating shots have become typical events in the month of March.  Usually, these events are associated with the NCAA College Basketball tournament; but on Friday night, the Poway Titans brought a little March Madness to the lacrosse field against the Bulldogs of the Noble & Greenough (Nobles) School from Dedham, Massachusetts.

The Titans trailed the Bulldogs most of the evening and were down by one goal with 43 seconds left in regulation when Nobles called a timeout.  As they have for most the season, the Titans struggled throughout the game with the time of possession battle, and they appeared to be on the cusp of losing this one because of it.

Coming out of the time-out Titan coach Zack Burke deployed a double-team on the ball with two of his best defenders, sophomore midfielder Marquez White (Syracuse) and senior Chase Crawford.  Crawford caused a Nobles turnover and White scooped up the ground ball.  Poway’s junior midfielder and offensive points leader Eli Butler (Wagner) then took over, tying the game up at 11 apiece with a 10-yard strike with 3 seconds left on the clock in regulation.

After Titan junior John Darcy won a crucial faceoff in overtime, Butler then finished the job 42 seconds later with a running high-to-high laser that found the back of the net, sending Nobles to their second straight defeat against California opponents.

Poway’s goal-scoring has largely been defined by the midfield position in the 2018 season, and this game was no exception.  Poway got hat tricks from White, Butler, and senior middie Kienan Morrissey; and junior Austin Contreras added another for 10 of the Titans’ 12 goals.  Senior attackman Harrison Greaves scored the other two goals for the Titans.  Jack Estepp, a dual-sport varsity letterman for Poway, assisted in three of the Titan goals.

Defensively, Poway was led by Crawford and a solid performance by sophomore Christian Vierra, who caused two Bulldog turnovers and collected a pair of ground balls.  Senior goalie Kellan Cutting turned in another clutch performance, saving 13 and captaining a rotating defense that saw action by 10 different long-pole defenders and 7 defensive midfielders.

The win pulls the Titans even at 3-3 in 2018, and ends a 3-game losing streak.  Despite the early losses, Burke remains bullish on this team’s outlook.  “I’m really proud of this team.  We have kept our heads in games, and we show great effort at every practice.”

The Bulldogs Hayden Cheek and Nick Loring each scored three goals to lead the Nobles school, whose team returns to the east coast at 0-2 on their young season.  The Titans will go up the road next on Thursday as they visit St. Margaret’s in Orange County, a difficult opponent for Poway over the last few seasons.